August SEO Updates – Have You Noticed What’s Different with Your Search Bar? 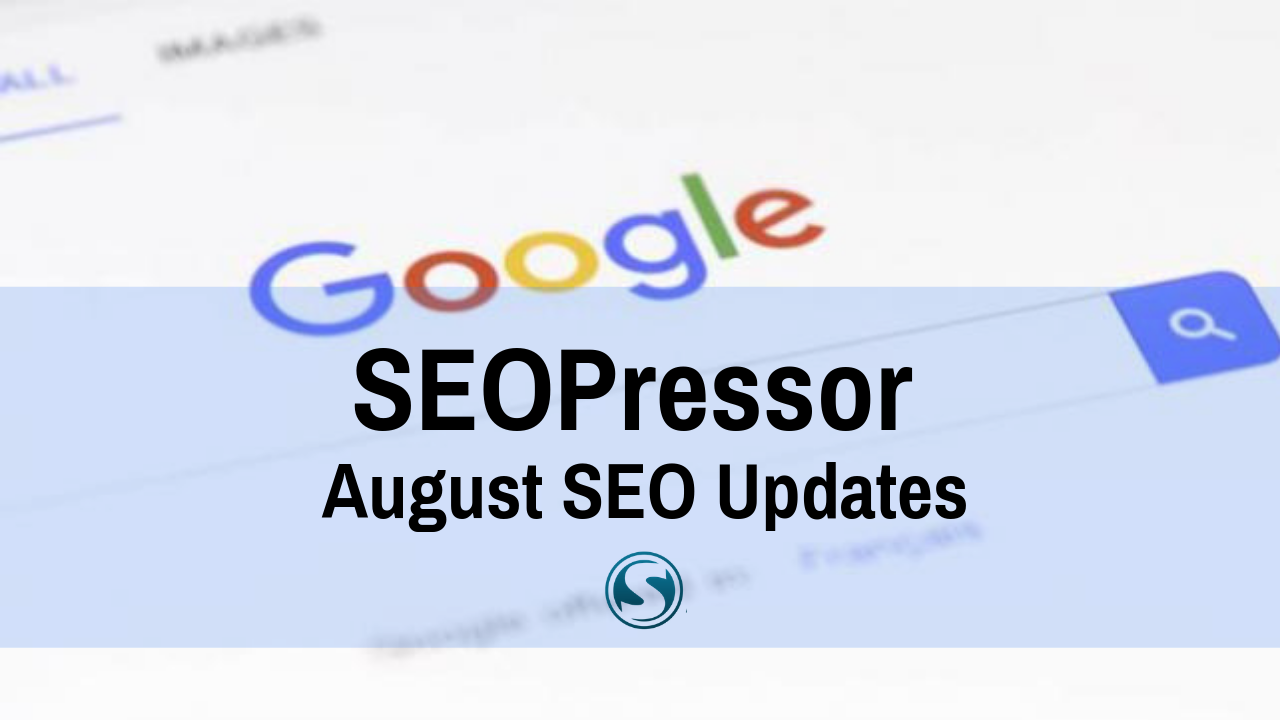 Welcome back to our SEO updates blog post in August. As usual, we will bring you the latest news and updates in the SEO industry throughout the month, just keep an eye out for any new updates on Friday!

Now you can check out our index for news labeled New! to find out what happened throughout the week or just go through our slide shows for a quick bite of what’s happening this week.

The SEO community is seeing signs in early chatter and Google weather tracking tools that there may be another Google search ranking update in the brew.

But so far, the volatility is smaller in size compared to the previous updates. Here are some screenshots of the weather tools.

Google’s John Mueller said in a Reddit thread that Google does not use word count as a ranking factor.

This was a reply to a Reddit user who was asking for a solution to check the word count of each page in the SERP result, in which Mueller replied “Word count is not a ranking factor. Save yourself the trouble.”

This illicit response from many users who asked Mueller to stop trolling.

Though it may be true in the literal sense that word count is not a ranking factor.

However, it is undeniable that longer content has a tendency to be more comprehensive, contains more relevant keywords, and naturally link-worthy which goes to explain why they are more likely to be highly ranked than their shorter counterparts.

Google Ads has launched a brand new feature named account maps. It basically gives you a quick way to visualize your account structure, view each account’s performance, and navigate through these accounts.

Compared to the past user interface which requires us to click through multiple pages and tables, Google said the account map will help users to understand how their account is structured and get a quick glance at the performance metrics for each account, impressions, clicks, and costs.

To learn more about this new feature, you can read this Google help document.

Lately, there has been speculation that Google may index parts of a page independently, but Google’s John Mueller has confirmed on Twitter that this is NOT TRUE.

But you should ask John to answer your question & not me. He's a Googler with more info about this than I have. But most of those pages aren't indexed. John has explained that already, and it makes complete sense. They are indexing the page and surfacing upshots for answers.

Apparently, this came up when Glenn pointed out a section from John Mueller in his Google hangout talk where he mentioned that it is super rare for Google to index content after the hash in the URL uniquely.

But back to Google indexing sections of a page separately, that is again, not true according to Google’s John Mueller.

Google may show they have the # URLs indexed but that probably isn’t what is in the Google index but what Google might be linking to. Google can and has anchored searchers down to portions of content before, but this does not mean Google indexed that part separately but rather it understands the content on the page.

The Google Chrome team announced that the latest Chrome 76 will be supporting native lazy-loading. Which is an exciting news to SEOs since the Googlebot is now overgreen, it means the same function will be coming to Googlebot as well.

Gary Illyes from Google shot Martin Splitt, another Googler whose been working alot with Java Script to confirm that. And a confirmation we got.

Yo, @g33konaut ! Does this work with our rendering service? Asking for a friend https://t.co/R8sJ5yD2gE

We are not sure if you have noticed, but Google has dropped the magnifying glass in the search bar and substituted it for a text-based “Search” button. Previously, several users have noticed Google testing this out a few months ago – but now it looks like it’s here to stay.

Here’s what the previous search bar looked like with the magnifying glass.

Here’s is the new look!

Which do you prefer? Feel free to take a vote down at the comment section below.

At SEOPressor, we prefer the magnifying glass and what it represents. Then again, this small change is definitely not out of the blue and maybe a hint at what is impacting searches.

A Knowledge Panel tab for contracts?! That is freaking specific @Google! #SEO pic.twitter.com/HQPZX7PLIl

Recently, someone spotted a super interesting featured snippet in Google search, one that you will have to see it for yourself. 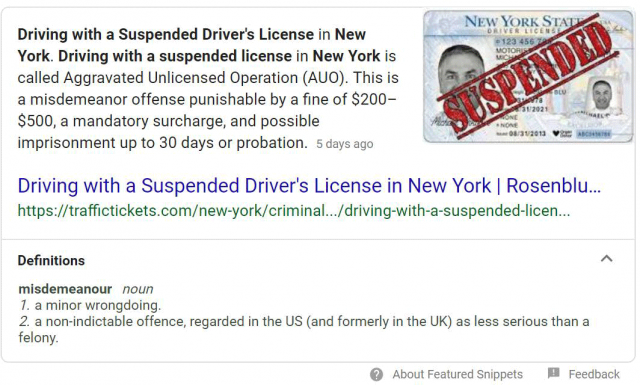 For those who are looking to replicate it, this is a result of the query “driving with a suspended license ny”. Though we at SEOPressor only managed to see the featured snippet, maybe you can try your luck or have you ever seen this happen before? Comment down below.

Google is spotted testing an expandable version of the “People Also Search For” Carousel, according to a tweet by Valentin Peltzer.

This actually looks a lot like the expandable “More People” carousel but for a different type of content.

Google has made a change again, this time fully dropping website URLs for Breadcrumbs on desktop search.

Then again, this design is not all that new.

Back in 2015 on mobile, Google also changed from showing website URL to showing the site name plus breadcrumbs in the search result.

If you were not aware of it, go ahead and watch the video below:

On 26th August 2019, Google’s Chromium Engineer David Bokan replied to Glenn Gabe that they are currently running a test on 5% of WebAnswers results. See the tweet below.

Google Search is currently running an origin trial for ~5% of WebAnswers results so it's kind of random whether you get opted into it or not.

You can enable the feature on the client-side though using chrome://flags/#enable-text-fragment-anchor

What do you think of this feature that Google may release soon? Do share with us your thoughts.

15/08/2019 – Google My Business having issues on transferring reviews

Barry Schwartz from Seroundtable reported that there has been ongoing issues with Google My Business’s (GMB) reviews transferring function.

Before this, GMB can transfer a business listing’s review from their old listing over to their new listing. Perhaps they changed their name, or their location – since they are still essentially the same business, having their reviews transferred over can be very important for their online reputation.

It appears the Google team is aware of the problem and called it a “technical issue”, but it doesn’t seem like a solution is gonna be delivered soon.

I believe some of you who use Google My Business faces this problem where your service was not listed as an option.

The good news is that Google has provided more options which include ‘Install faucet’, ‘find & repair leak, as well as ‘unclog drain’.

Not only that, you can actually add a custom service. Refer to the image below. 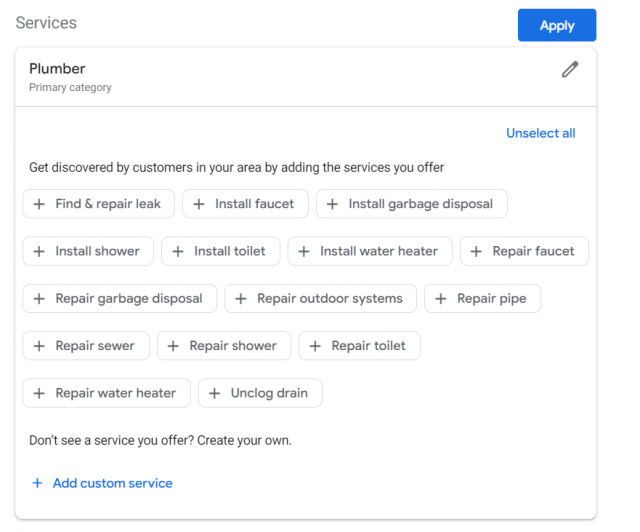 I believe both users and local businesses will be benefited from this update.

Greg Sterling, the VP of Strategy & Insights for Local Search Association (LSA), attended the Engage Conference last week and tweeted that a Google representative said that 65% of all searches are now mobile..

While there are no other sources backing this up, these statistics are most likely true as we see the increasing smartphone users who spend a large of their time on mobile search, portals, and social apps.

According to Statista, this number of mobile search users is even expected to increase to 221 million users by 2020.

The Google Websmasters Twitter account tweeted a statement against leasing subdomains/subfolders, it is not directly against their written guidelines. But the big G seems to be dissaproved of such tactics.

This is a common tactics used by a number of big name coupon sites, which piggybacks on some know media site’s subdomains and gained quite an edge in ranking for SERP.

The same “cheatkey” has recently seen been adopted to other niches including the product review niche.

It’s great seeing Google is acknowledging this problem, and might be coming out with something to fix the situation. We’ll keep our eyes on this issue.

Overall, we'd recommend against letting others use subdomains or subfolders with content presented as if it is part of the main site, without close supervision or the involvement of the primary site.

It seems like the team at Google is entertaining the idea of notifying the webmaster when their featured snippet is removed. Danny Sullivan from Google did made it clear that having a featured snippet taken down do not have the same implication as giving the page a manual action. It’s not as severe.

We don't as it's not a manual action against the page itself. It is something we're considering, though. There may be other ways to show eligiblity for particular features.

Old news for some, a nice reassurance for the rest. John Mueller confirmed that disavowed links are resersible, you just need to remove it from the disavow file and it should be fine.

If you remove something from a disavow fire and upload it again, then it won't be disavowed anymore, so that should just work.

Which means there are less people clicking on the 10 organic blue links, and more of them either simply made a search then exit the SERP entirely, or clicks on an advertisement. Which means, bad news for those replying on search engine as their main source of traffic. 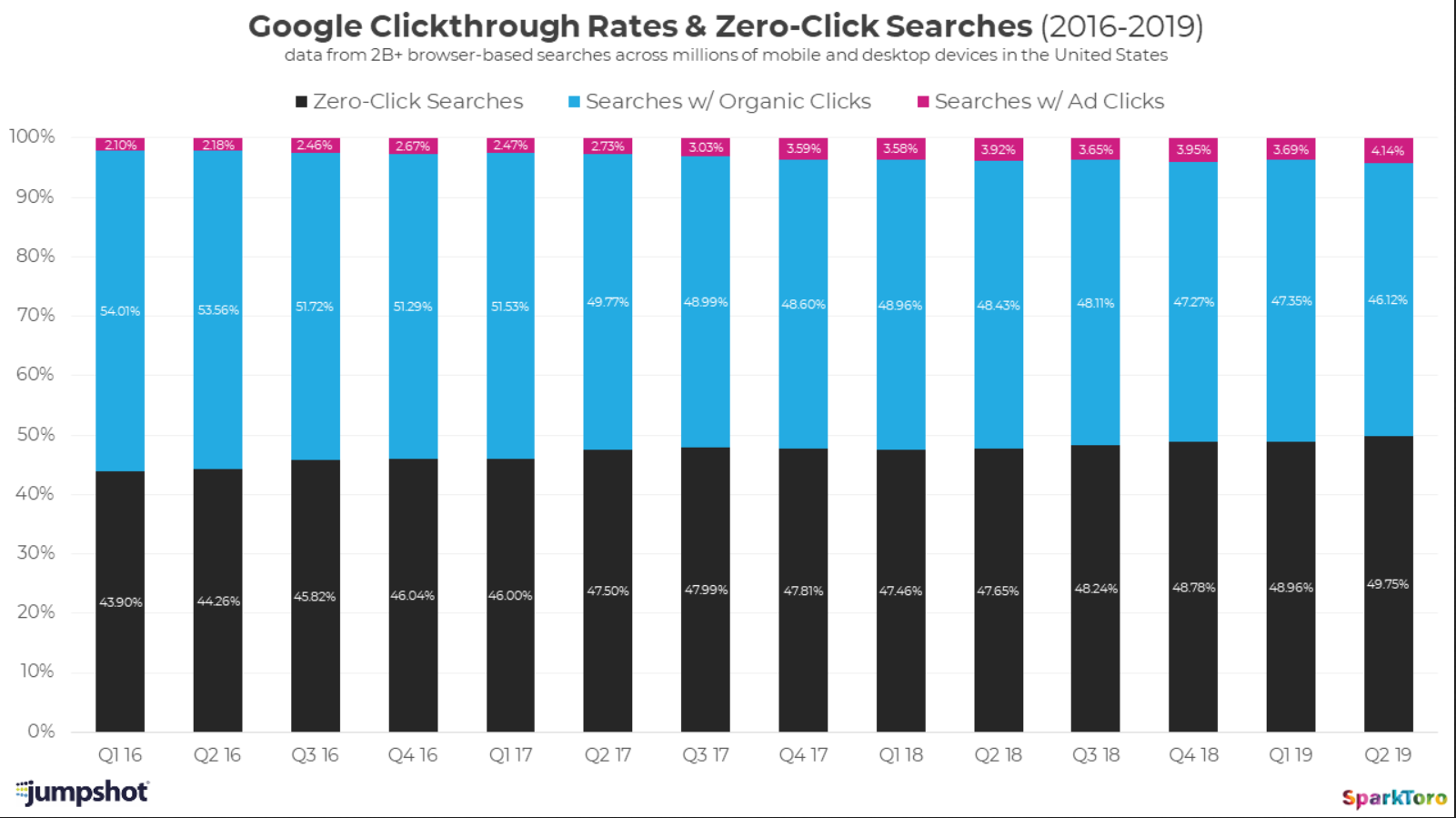 Click on the source above to read the full report from Sparktoro.

This probably comes as no surprise, but does Alexa Rank affects your Google ranking in anyways? Nope. No. Negative.

John Mueller shed some light on how Google tries to recognize the information on author, reviewer and the website overall in a recent hangout.

Here’s what he said.

“If it’s just like hidden away in structured data then that’s not very useful for users because users tend not to use view source when looking at a page to determine whether or not they should trust it. So I would try to find an approach that works well primarily for users and focus on that.”

He seems to be saying Google is trying to extract those information semantically, like how a reader would. Thus only marking them up using structured data will not be helping.

Pretty vague suggestion, but he said this is not a binary issue. So let’s all mull over how his advice can transfer over to our E-A-T efforts.

There is no technical trick to any of this — there's no meta-tag, there's no setting, there's no HTML element, there's no word count limit, no keyword-ratio, no magic keywords that need to be included. Some things are binary, true / false, but showing "E-A-T" is not one of them.

July SEO Updates – What Happened to Bing Discover?SEO Updates: What You Need to Know About the June…How To Create A Great Press Release To Boost Your…
Loading Disqus Comments ...