It’s October but in this SEO update, we will be diving into the changes seen with the release of September Core Update last Tuesday, other Google announcements, and provide you with the usual awesome SEO tips.

Google announced a core quality update which started to roll out on September 24, 2019. Here’s the announcement.

Later today, we are releasing a broad core algorithm update, as we do several times per year. It is called the September 2019 Core Update. Our guidance about such updates remains as we’ve covered before. Please see this blog for more about that: https://t.co/e5ZQUAlt0G

Now it’s been 10 days and according to Marie Haynes, this appears to be a fairly significant update, affecting many verticals but in particular eCommerce, health, and legal websites.

Among her clients, the sites which had show improvement were those that made changes related to improving their trustworthiness (T in E-A-T), improving technical aspects on their site, and trimming out thin content.

This seems to be aligned with the blog that Google has linked to, regarding “What Webmasters should know about Google’s core updates”.

But if you are short on time, here are the main points:

Over the past 24 hours on October 24th, many have noticed that Google seems to have done another ranking and algorithm update, causing a lot of movements in SERP.

Speculations are that it may be due to the weekend update or perhaps a tremor from the previous core update in September, or maybe both.

But generally, the changes in SERP are disappointing as SEOwner notes that after this update there are random PBN homepages ranking on top 20 for big keywords.

Also in DE, he said that he spotted some random “writing” domain ranking on a casino keyword.

Although Google has always strongly recommended sites to use responsive designed but John Mueller has recently adviced staying away from m-dots websites as a strong recommendation. Here’s the Tweet.

In the tweet, Mueller had only said that this will make things easier, but to further elaborate — mobile-dedicated websites are designed under a separate URL (eg m.site.com) and are completely distinct from the full site, which dispersed your website traffic and SEO, which is what makes responsive websites a better choice.

Google’s John Mueller posted on Reddit that he agrees that HTML sitemaps are not worthwhile for SEO purposes. 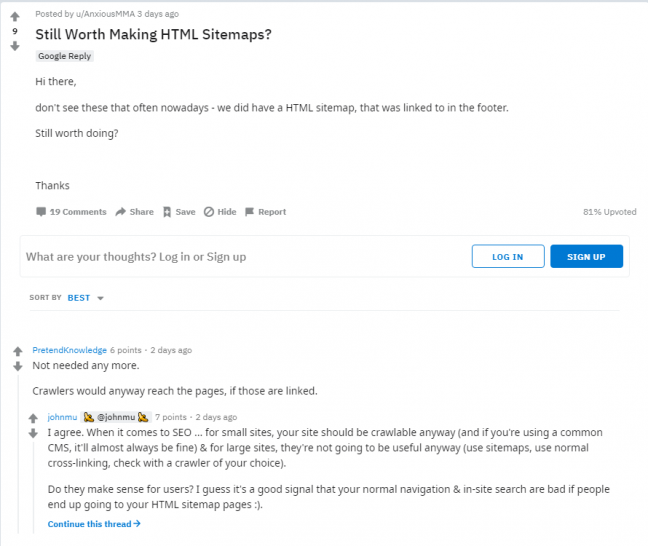 HTML Sitemaps has always been seen as an important part of SEO, like almost forever since 2009 when Matt Cutts picked HTML Sitemaps over XML Sitemaps.

Then again, ten years have passed and like Mueller said if Google cannot crawl your website through normal navigation, then you might have bigger issues. Still, on a consensus from the team in SEOPressor, we think an HTML sitemap is still something better to have than not.

Last week, John Mueller shared on Google Webmasters Hangout (5:48 mark) that he believe Google News has made the application process much stricter.

If you want to increase your chances of getting into Google News, you will need to ensure you meet their content policies and technical index guidelines. Here are some of the items included in their policies and guidelines:

In the video above, mark 49:43, Google’s John Mueller was asked if links expire. He immediately responded with a “No, they don’t expire”. But, links get less important over time, especially if it’s on a large website that is growing regularly.

John Mueller shared an example of this. If you have a link from CNN, then it is something that’s really important to them. However, after a year or two, it may end up in the archive, which isn’t something that Google thinks is important anymore.

Most webmasters will check their links from time to time, be it internal, external, or backlinks to ensure they all have value to the site. And you should too!

On 7th October 2019, Google announced that there are two new reports for video content. 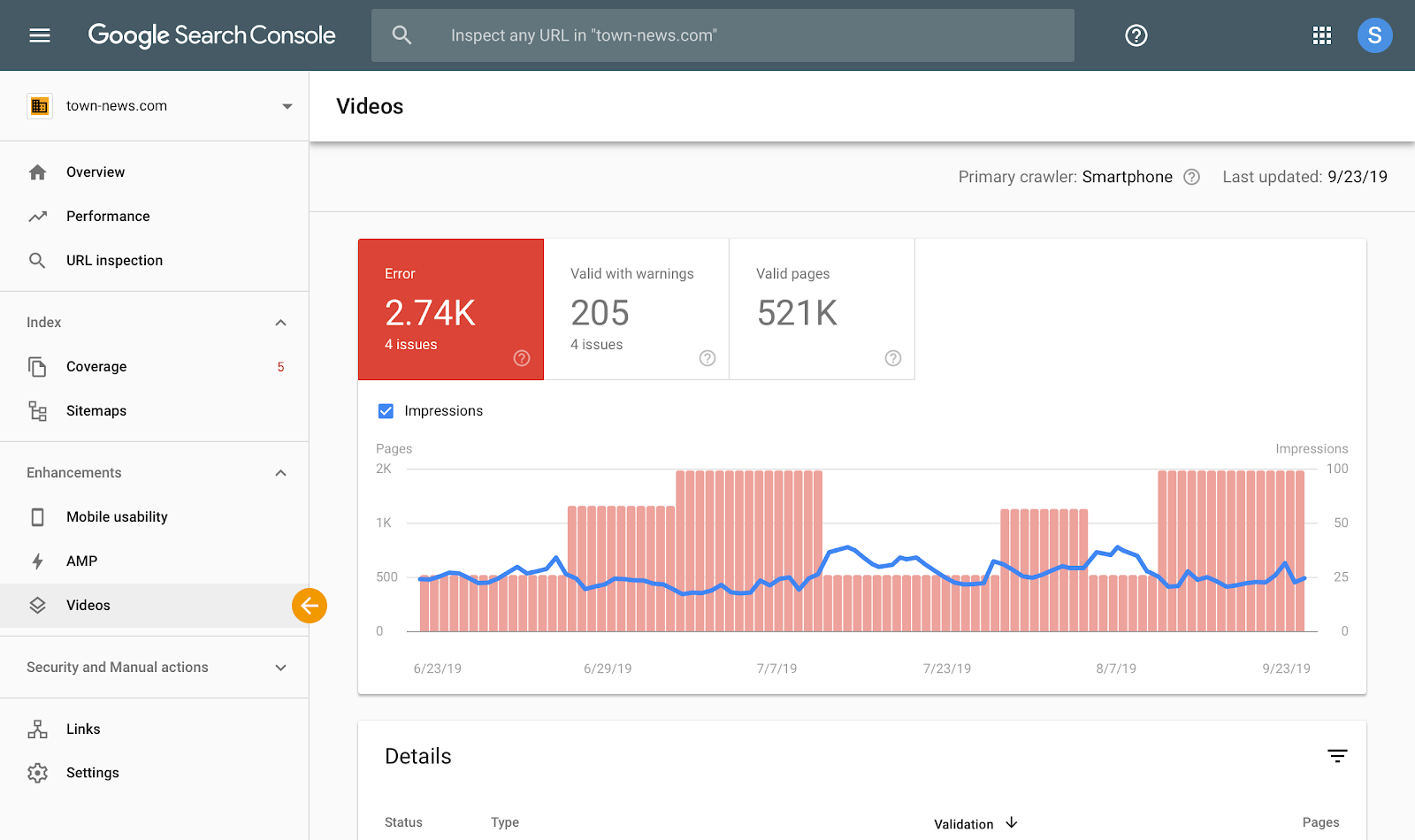 Webmasters users structured data to help the search engine understand when videos appear on a page. These structured data will cause rich visual treatment to be displayed, such as the video’s duration and previews.

The report allows you to debug your video content on your site. It also shows you any errors and warnings for markup implemented on your site. After fixing the issue, you may recrawl your affected pages to confirm if it was resolved.

These reports tell you how well your videos are doing in Google Search and Google Discover. Your content may be in ‘Videos’ appearance if your page uses VideoObject structured data, of if Google detects that there is a video on a page.

Google has shared best practices for videos that they recommend all webmasters to follow. Some of the points include adding a high-quality thumbnail image for the video and make sure each video lives in a publicly available page where users can watch the video. The page should not require a login.

Early last month, Google shared that nofollow attribute on links will be used as “hints” for ranking purposes. On top of that, Google introduced two new link attributes which are rel=”sponsored” and rel=”ugc”.

Today, Gary Illyes from Google talked a little more about the two new link attributes. He said that it is not compulsory to be implemented but the attributes are introduced to help Google understand the web better.

Focus on the other part: nofollow became a hint. Ugc and sponsored are icing on top of that cake, and it's one of those things where you don't have to do anything if you don't want to. If you want to help us understand the web better, implement them. If you don't want to, don't.

So, I have a question for you, would you implement the link attributes and why? Let me know in the comment section below.

Recently Google’s John Mueller said on Twitter that if you automatically translate your content from one language to another using automated translation services, it will likely not lead to a Google penalty or manual action.

He did add that the content might not come out great after you translate it and thus not rank well since it’s bad content in general.

But moving forward, John said that one day Google may have to rewrite that guideline as machine written content gets better.

All this while, we have been Google testing different variations of SERP results, and this time Google is showing image carousels in the featured snippet position. We are not sure if it is entirely new, but for us it is and here’s the snap shot. 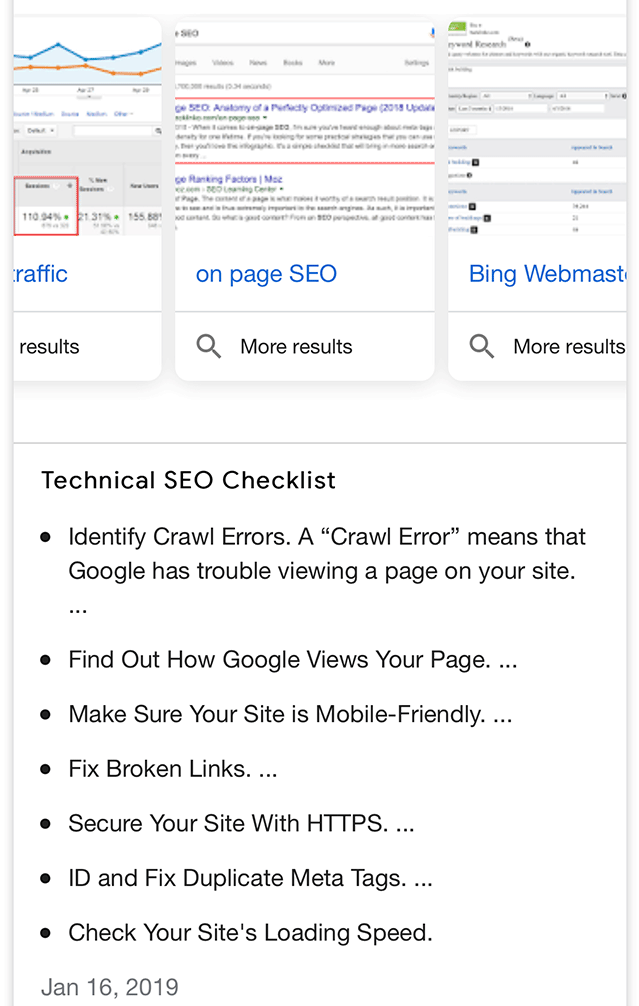 We are not sure if Google is going to roll this out, but if they do — this will shift a great weightage to Image SEO.

Lily Ray tweeted about a new tweak she catched Google experimenting on. 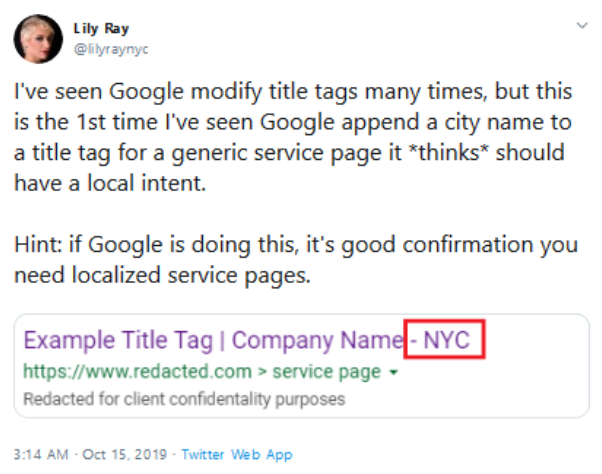 According to Lily, it is a generic service page that may have hinted to Google, or Google decided that it has a local intent.

Has anyone else replicated this result? I surely can’t. Leave us a comment below if you do.

Brodie Clark recently tweeted about a new timestamp feature he noticed on SERP.

How’s this for useful functionality. The “in this video” feature shows all the key parts of a clip, allowing you to jump directly to the spot you’re most interested in. Appears to relate to timestamp summaries added to the video description. Very useful feature. pic.twitter.com/SktBUbqutt

It turns out Google has announced this on its blog in September, saying that this is an effort to make other types of information more skimmable and accessible.

When you search for things like how-to videos that have multiple steps, or long videos like speeches or a documentary, the search will provide links to key moments within the video, based on the timestamps provided by content creators.

To use this feature, video creators are required to add markup to the video. Learn more here.

Questions and Answer section for Google My Business Malfunctioning

The problem was first spotted back in April, and Danny Sullivan from Google acknowledged the problem back then. But… it seems like the problem is still at large since there was an influx of complains being posted on the Google Webmaster forum as reported by Barry Schwartz.

If you’re not familliar with the QnA session in the GMB listing tab, here’s a screenshot. 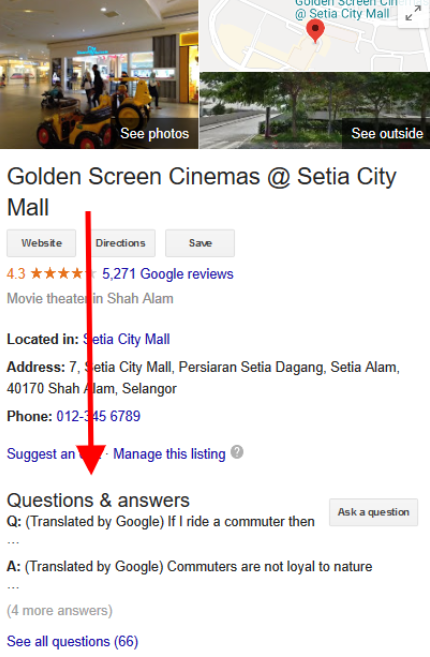 So far, there’s been no further updates about the issue from Google. Other than theone tweet from Danny Sullivan acknowledging the issue.

The Google Webmaster tweeted about an issue with indexing fresh content, that affects both the general search tab and the news tab.

It took the Gooogle team around 8 hours, from when they first tweeted about the issue to when they announced that it is resolved.

The issues seems to be affecting Italian websites as well, as shown by a user with the Twitter handle @Manzotto. Manzotto tweeted John Mueller about the issue on the next day after Google tweeted that the issue was solved, right under the tweet itself. 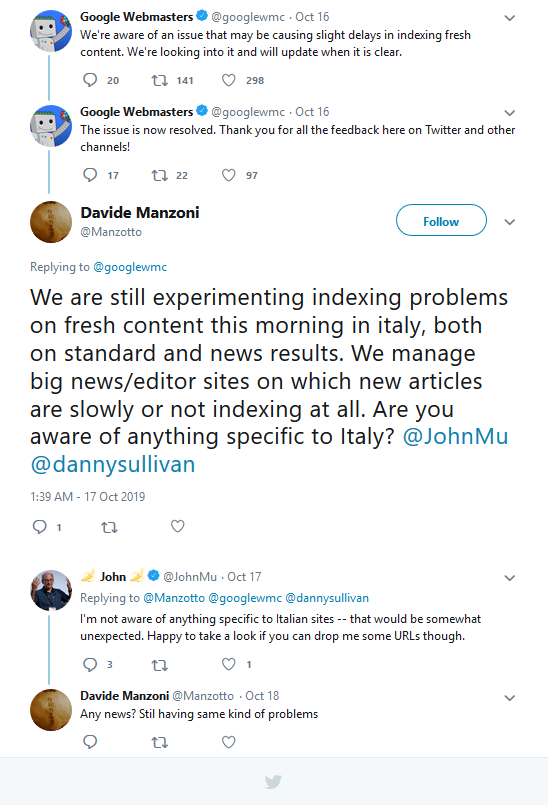 Perhaps it was just an isolated case since there’s no further announcement from Google about that issue, and there’s no other webmasters complaining about it as well.

Gary talked about this during PubCon, explaining why the decision to change nofollow from a directive to a hint.

Gary further shared that now that Google is able to look at nofollow links, they can have better understanding of the whole web, instead of being cut off at a nofollow link.

How that would play in ranking though, is still undecided and will be the call of the ranking teams.

That is it for this week’s SEO updates, remember to stay tuned next week as we bring you more weekly SEO news you should keep an eye out for.