SEOPressor / Blog / SEO Updates: What You Need to Know About the June Core Algorithm Update
SUBSCRIBE Next Post

SEO Updates: What You Need to Know About the June Core Algorithm Update 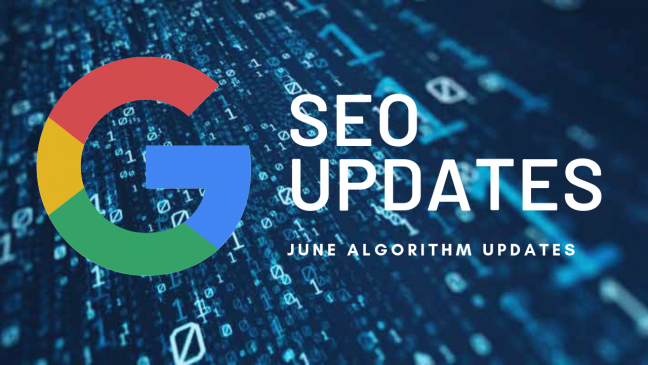 We’re trying out something new! Our SEO scouts have always been on the lookout for Google announcements and SEO updates.

Before this, it was something we shared between the team, but then one day someone asked, why not share it with our audience and it clicked!

That’s why we are kickstarting this new SEO updates series! It will be out weekly to keep you updated about the chatter in our SEO community. So without further ado, let’s get started!

This update is a big one! Pre-announced and starting from June 3, it seems that the June core algorithm update has strongly affected a large number of sites.

Some time has passed and it seems that the June core algorithm is still ongoing as many have reported a possible Google algorithm and ranking update rolling out on June 19th.

From a Google SEO News and Discussion forum on WebmasterWorld: 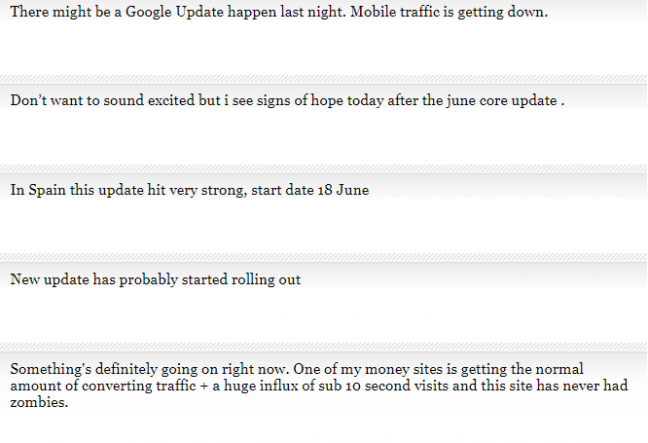 Turning to weather tools, we are seeing the same sight as well.

But so far, what do we know about the June Core Algorithm Updates?

In a rare pre-announcement by Danny Sullivan on Twitter, this Google June Core Algorithm Update went live on June 3.

As of June 8, it was fully rolled out.

Those who took the hit were websites related to health, eCommerce, cryptocurrency, and news reporting sites.

Among those, the most notable drop was from two high authority websites – CCN and Daily Mail. 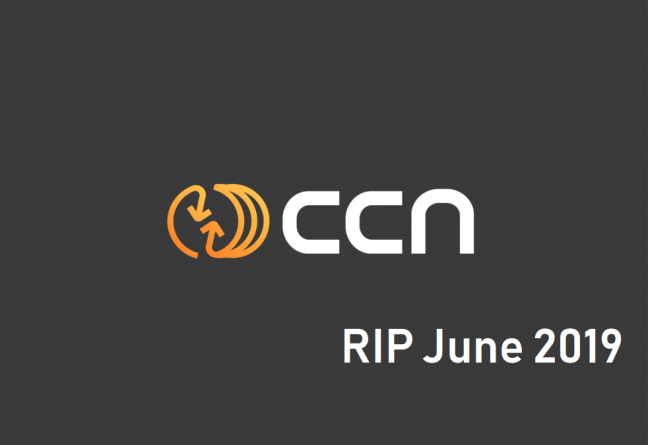 The bitcoin news site said that since Google rolled out its June 2019 Core Update, CNN’s traffic from Google searches has dropped “more than 71% on mobile overnight and their daily revenue is down by more than 90%.”

A Daily Mail employee even reached out to Google’s Webmaster Help Forums for help in diagnosing why the Daily Mail was suffering traffic losses. 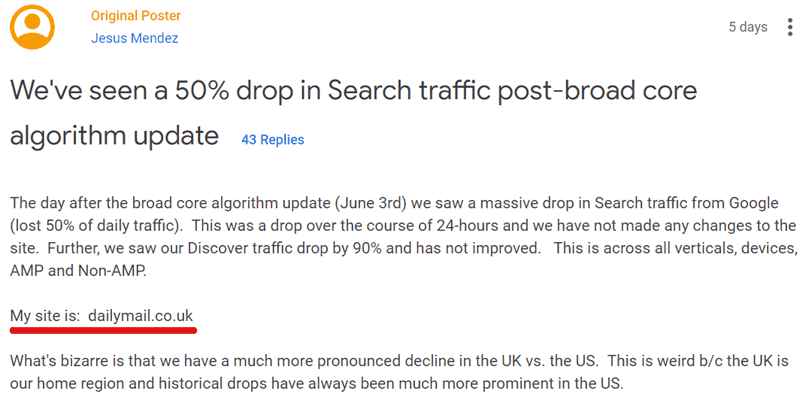 What comes in as a solution from Google’s Webmaster Help forum was to focus on the E-A-T scores, as recommended by many other SEO experts.

However, note that this is a broad core algorithm update which means it would cover a wide scope of topics, and solely focusing on E-A-T would be a mistake.

How do you recover from a Core Update Hit?

A question that comes up every time there’s a significant Google update. An article from SEJ quoted Danny Sullivan from Google saying that there is no particular fix should you be negatively affected by an update.

We tell lots of things to do. Improve site speed. Consider secure. Etc. But that's not what this update was about. It's broad. And respectfully, I think telling people there's no particular thing to "fix" is indeed helpful. It means, hopefully, they think more broadly…

Danny Sullivan mentioned that Google core update is a broad change. It is rarely about one specific thing and the only way to not be affected by it, (yes, you know it) is to create great content.

Another tip is to focus on what works, for example E-A-T and internal linking.

And paying attention to them apparently can work. I really loved this tweet that seemed to be an example of that: https://t.co/iJXBG83cXZ

On the other hand, we also picked up some practical advice from John Mueller on recovering after the negative effects of an algorithm update.

Mueller said, if you were negatively affected by the June 3 core update, in most cases, provided your business is a legitimate business with some sort of brand recognition, recovery is usually possible.

And if you are not well known, then you need to become known. Get other experts to recommend your content, and become known as a trustworthy source of information in your niche is the key to making improvements and gaining top rankings.

John mentioned 3 main things to look out for:

You can learn more from the video here, listen for yourself: 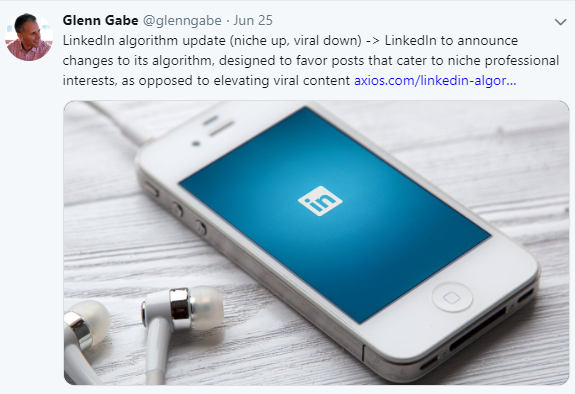 LinkedIn Engineering has announced that they’re changing their algorithm. The algorithm favors posts that are catered to niche interests rather than viral content.

LinkedIn now provides more relevant content to their users. Other changes include:

If you are a content creator on LinkedIn, remember to create engaging content and go for niche topics if you can.

Google posted on its data anomalies page that due to an internal issue, Search Console has failed to capture some image search statisitc from June 5th to June 7th.

The search engine notes that the change did not affect user search results, but only the data reporting. You can see Google’s full announcement:

Though at SEOPressor, we did not see any significant drops within our Google Seach Console, Glenn Gabe, an author at Search Engine Land has noticed an obvious dent.

See the screenshot below for an example. Not all image search traffic dropped, but def. some: https://t.co/CuM8vquYcN via @rustybrick pic.twitter.com/MALOkhVYz6

But keep in mind, there was no impact to rankings and this is just a reporting issue.

Is a 302 redirect stopping you from getting a featured snippet

Danny Sullivan recently hinted that if you are not getting the featured snippet you deserved, it’s time to check. Could it be possible that a 302 redirect is stopping you from earning that top position? Well, it is the case for Buzzsumo.

Ok @searchliaison what about this rich snippet for a @BuzzSumo branded query that is showing @G2dotcom results instead of the actual website i want… pic.twitter.com/9zSNnbIGwZ

Links and HTML title tags are still important for SEO

No surprise here! Between Gary Illyes and John Mueller, the two has confirmed that links and HTML title tags still matter to doing well in Google’s SERP.

We had Gary Illyes saying that HTML title tags matter to SEO since 2006.

If you mean HTML titles, they can help a lot. We've been saying since 2006 or so to write proper titles, but no one's listening 😒

While John Mueller from Google said links are important for PageRank and building trust.

Links are a bit easier – from one page you'll have links to other pages. That helps to crawl the rest of the website, and helps to spread signals like pagerank through the site.

On June 24th, Official Google Webmasters Twitter Account introduced a new feature on Google Search Console which allows you to search within the markup, copy the code and tweak it. 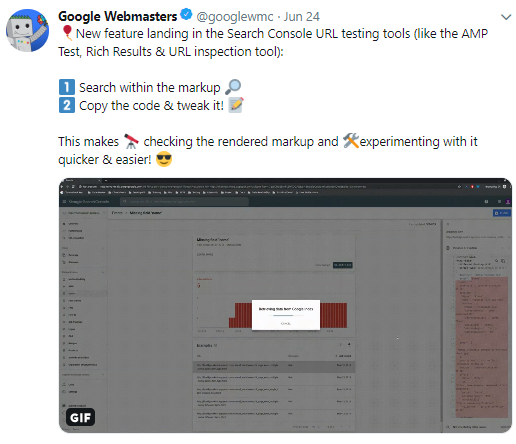 Thanks for always making things easier for us Google!

On the next day, Official Google Webmasters Twitter Account posted that they were having some issues with Search Console data freshness but at the time of posting, data was said to be up to date. They mentioned that they’re still looking into the issue to ensure that it is completely resolved. 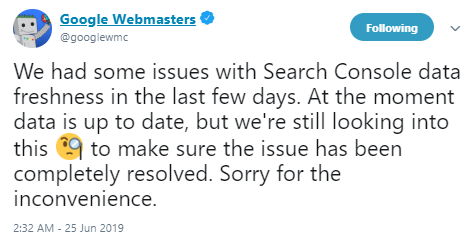 However, most users replied to the post saying that their data was not up to date yet. 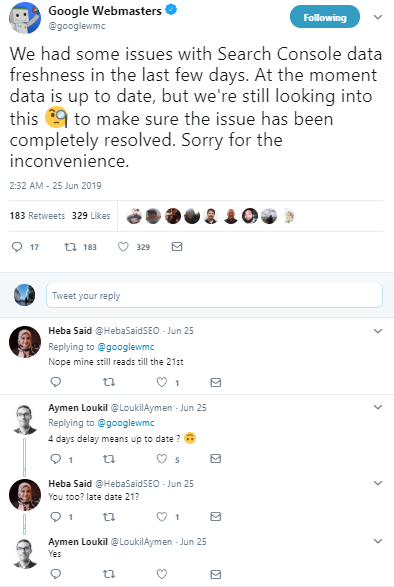 Is your data up to date? 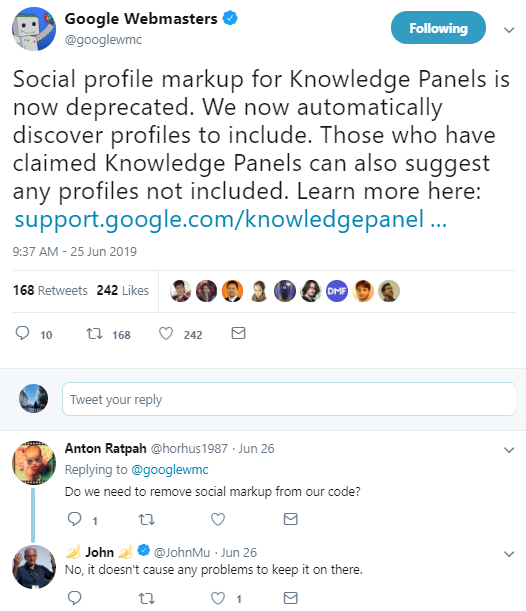 Google Webmasters announced that social profile markup for Knowledge Panels is now deprecated. Google will now discover profiles to include in Knowledge Panels. Official representatives can suggest a change directly.

For website owners who wish to include social profile information on Google Knowledge Panels, remember to use markup on your official website.

It can be seen with a person icon and the number of people visiting in the week. Visits here, refer to website visits, not store visits.

Honestly, Google is always running tests so why should we care? Well, if this one successfully rolls out – it’d go to show that providing social credibility is a boost for click-through rate.

Then again, in the example shown above, the extension had only appeared on a brand search. Let’s keep an eye out if it is also running for non-brand queries.

Bookmark and Come Back Later on Google Shopping

Google Shopping now lets you leave bookmarks! If you like a product and want to come back to it later, you can now bookmark the product in the Shopping tab and add it to a custom collection.

GOOGLE SHOPPING: *NEW* Bookmark the products you like on the Shopping tab?

You can then add these products to custom "collections". #ppcchat #ppc @googleads pic.twitter.com/cmQA4wZL2G

On June 21st, Twitter user @Venkatramani shared a screenshot that includes a knowledge panel with no attribution. 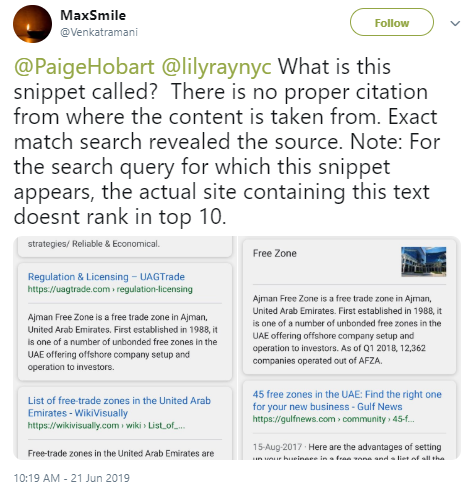 What follows later is several sources, including Barry Schwartz, said it seems that Google is “testing” knowledge panel without attribution. Obviously, it was a serious issue for all website owners. Google using your content without providing the source?! 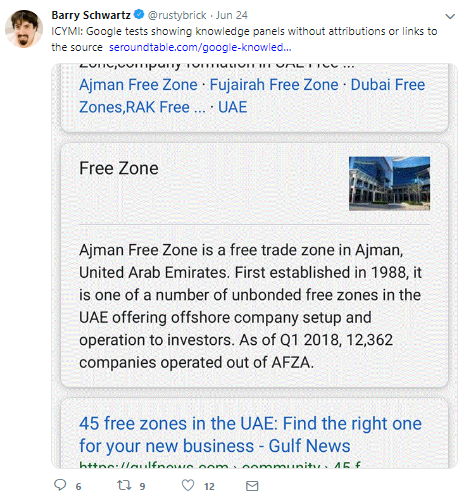 Google public Search Liaison, Danny Sullivan, later confirmed that it was not a test but a bug happening only on Firefox for Android. 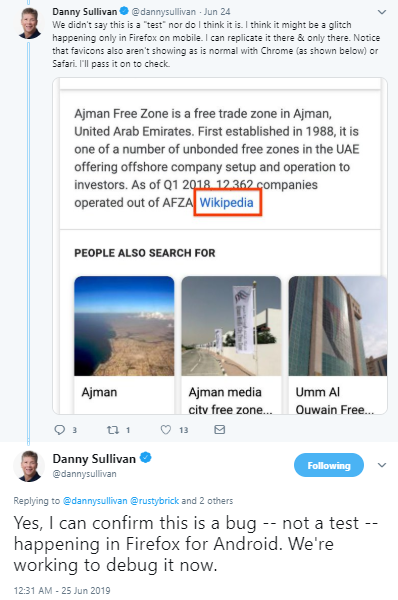 On the same post by @Venkatramani as well, Danny Sullivan highlighted that the absence of favicon is not a bug but was done on purpose. He mentioned that for some browsers, they just show a simpler result format.

In case you were wondering why there were no favicons, now you know why.

Google previously mentioned that for all new, previously unknown to Google Search, websites will have mobile-first indexing enabled by default. To continue their effort, they have provided users a few improvements to Google Search Console that help users understand how Google crawls their website. 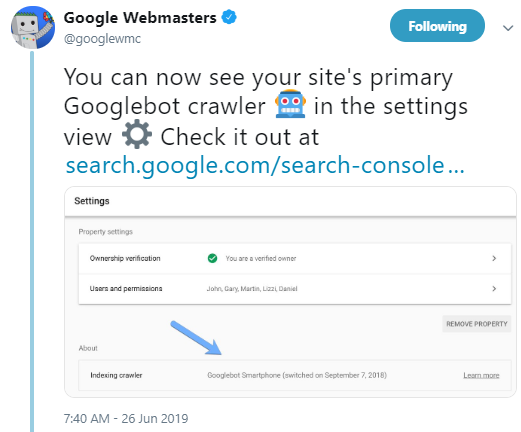 You can see here which version of Googlebot is crawling your website.

If the settings show that the primary crawler is “Googlebot Smartphone”, it means that your website is already mobile-first indexed. 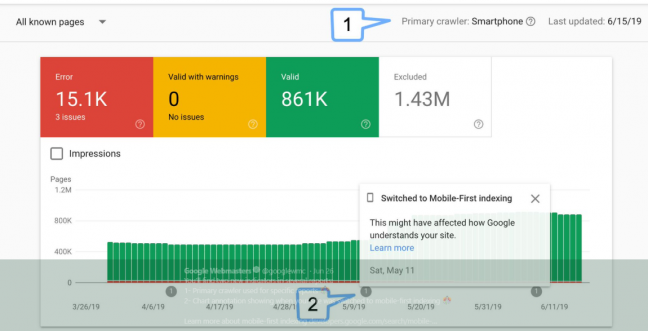 Have you checked it out on Google Search Console? 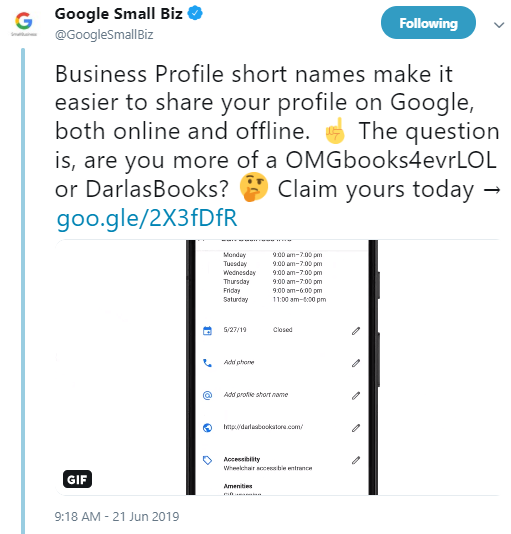 Google My Business Team has told a Twitter user through a direct message that they were facing a backlog and delay of 2-3 weeks for responses. 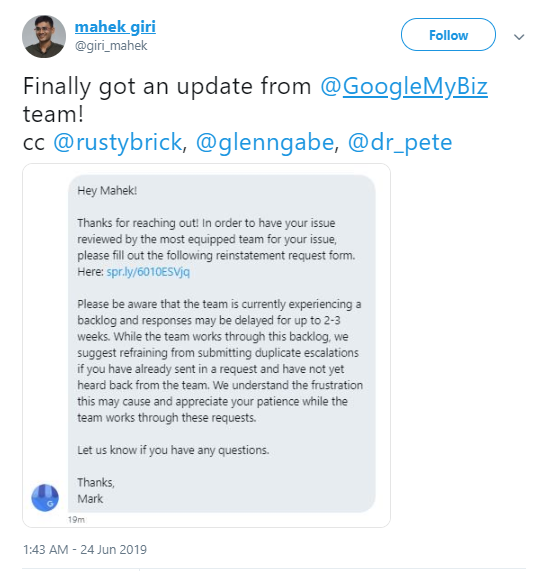 “YouTube recommendations are toxic.” – says an ex-Googler who worked on the algorithm. It’s built to not help you get what you want, but to be addicted.

‘YouTube recommendations are toxic,’ says dev who worked on the algorithm @gchaslot

“But the problem is that the AI isn’t built to help you get what you want — it’s built to get you addicted to YouTube. Recommendations were designed to waste your time.” https://t.co/WEyntsLp2m pic.twitter.com/tCuMkOSqPV

Guillaume Chaslot, who used to work at Google on YouTube’s recommendation algorithm, shared that the metric the algorithm uses to determine a ‘successful’ recommendations is watch time. And when it comes to engagement, sensational content is often recommended widely: conspiracy theories, fake news, flat-Earther videos, for example.

“Right now the incentive is to create this type of borderline content that’s very engaging, but not forbidden.” Basically, the more outlandish content you make, the more likely it’ll keep people watching, which in turn will make it more likely to be recommended by the algorithm — which results in greater revenue for the creator, and for YouTube.

That’s all to the SEO updates! Have you spotted any other updates or changes in Google? Leave a comment down below and let us know.