Snapchat For Business: The Ultimate Guide For Marketers

Chances are you have heard of Snapchat, but probably have not paid too much attention to it. As one of the younger social media networks (founded in 2011), it was likewise seen as being for younger users, and as such was generally off the radar of most brands looking for marketing outlets.spo

However, in just a little over five years, Snapchat has amassed some truly impressive user statistics that have started turning the heads of marketers.

Some of these numbers may be a little rough, because Snapchat doesn’t heavily self-promote its own stats, but the overall picture is still accurate.

Snapchat has exploded in the past couple years and, practically overnight, has become a serious competitor to the established platforms such as Facebook and Twitter.

That means it may be time for your business to start investigating Snapchat.

Is Snapchat For Me?

Before we get into the nitty-gritty, one major issue should be addressed up front: Snapchat’s user base is heavily tilted towards younger users.

Roughly 2/3 of its user base is under 35, and a significant chunk of that is under 18. The user base is also skewed towards females, but still enjoys significant usage by both genders. There’s an estimation of 30% US Millennials are using it. 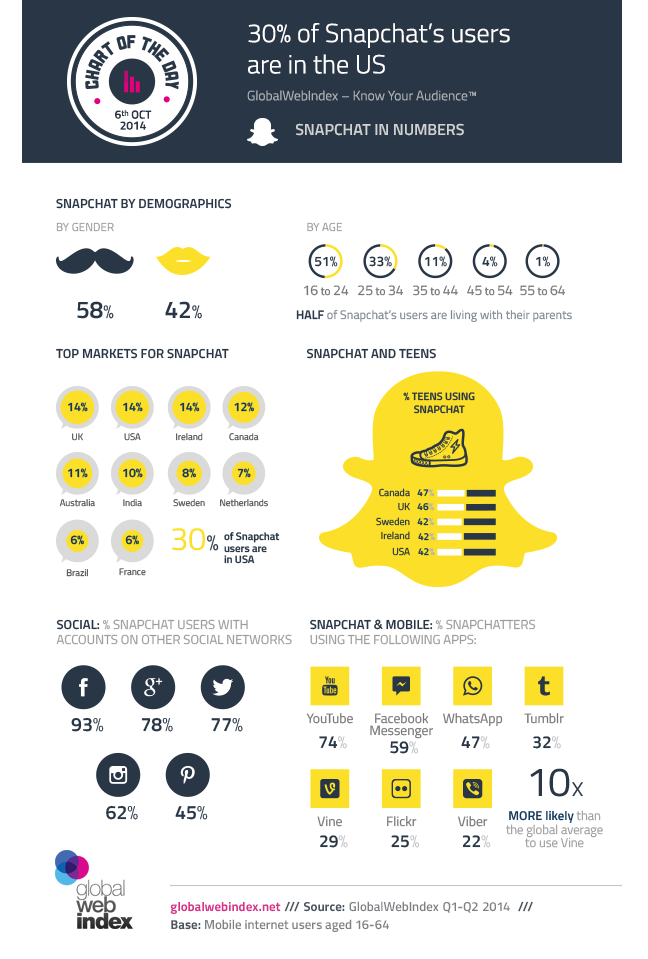 Getting to know your audiences: It’s clear that most Snapchat users are young audiences that you can focus on.

Basically, if your brand or product is not aimed primarily at Millennials and younger Xers, Snapchat is not for you. Likewise, avoid Snapchat if you’re uncomfortable or unskilled at working in a medium where there will be plenty of teens and even younger children present.

However, if the younger demographics are among your targets, then Snapchat could easily be the best new marketing move you make in 2016.

Now, let’s look at how it works.

However, its primary gimmick is what makes it different and seems to be one of the main driving factors behind its success:

Nothing is permanent on Snapchat. (Almost.)

The longest any piece of media will ever last on Snapchat is 24 hours. Individual pictures or chat messages have a lifespan measured in seconds. Once a viewer sees a new Snap picture, for example, it will vanish in 10 seconds or less and never be seen again. Even chat messages are erased after they are viewed.

The only way any media is saved on Snapchat is if the viewing user decides to use their device’s screenshot feature to save a local copy. Otherwise, Snapchat media is as fleeting and impermanent as a hallway conversation.

This makes Snapchat a truly unique marketing proposition. There is practically unlimited room for creativity and experimentation because even the most colossal failure of an experiment will be gone and forgotten within a day or two.

Simply put, it’s very hard to damage a brand on Snapchat. And when used well, it has significant potential for boosting your brand awareness or even sparking off a fad that greatly expands your reach.

Getting A Handle On Snapchat

Snapchat is designed for ease-of-use, and only includes a handful of major features that a user or brand can utilize. Here is a quick rundown of the primary feature set:

Snapchat is also popular among the celebrities because snaps are fun and spontaneous – you can choose up to 10 seconds for users to view your snaps.

A Snap is a single-serve picture or short video, which is shared directly between users (ie, not on a public feed). These are generally captured using Snapchat’s built-in snapshot/video capabilities. The user can choose to have it last between 1-10 seconds upon uploading, which is how long the recipients can view it once they’ve logged in. Then it’s gone forever.

Snaps can also be enhanced with built-in filters that work like standard Photoshop filters, adding effects such as sepia-tinting or psychedelic distortions. 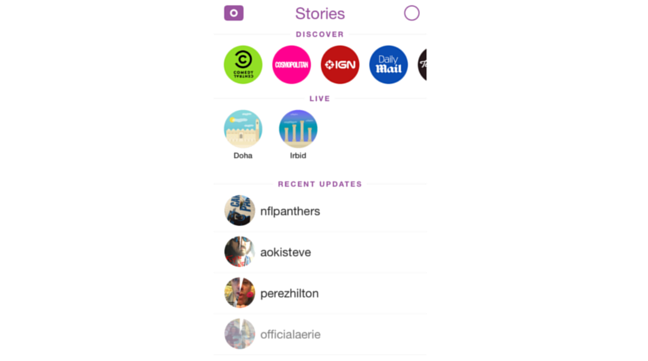 When you post a Snapchat story, it will appear on your feed that is visible to you and your friends. You can also view your friends’ stories under ‘Recent Updates’.

Unlike Snaps, Stories are public and available for viewing for up to 24 hours. These are collections of several pictures or videos which are played in slideshow fashion, and also incorporate comment sections for both individual slides and for the Story as a whole. 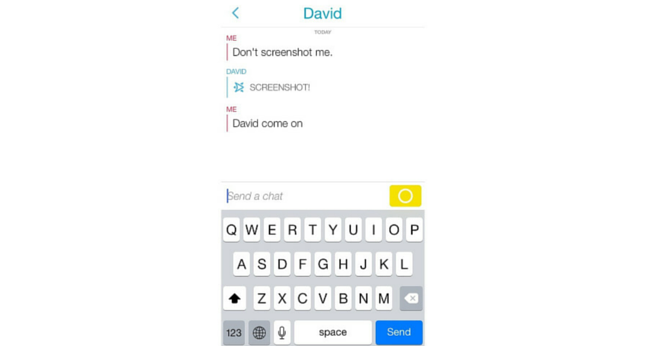 Snapchat will automatically delete your message after you and the recipient have seen it. You will also know if the recipient screenshot your snaps and chat.

Snapchat incorporates user-to-user chat functions that work pretty much like those on every other social service. The only difference, again, is that the chats vanish upon viewing rather than being archived.

So, those three services are the heart of Snapchat. However, there are more enhancements available, and these are where things get more interesting. 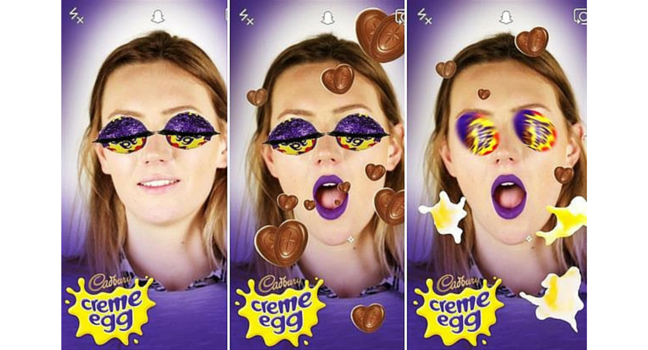 Cadbury uses Snapchat to connect with their audiences by creating a Cadbury Creme Egg lenses for the users to have some fun; at the same time, promoting their product.

Lenses are like animated filters. They can add complicated graphical elements to a picture or video, such as integrated animated characters into a scene or integrating live video effects.

As an example, one of the most popular of these is “puking rainbow”, which causes rainbows to fall from open mouths in a video. 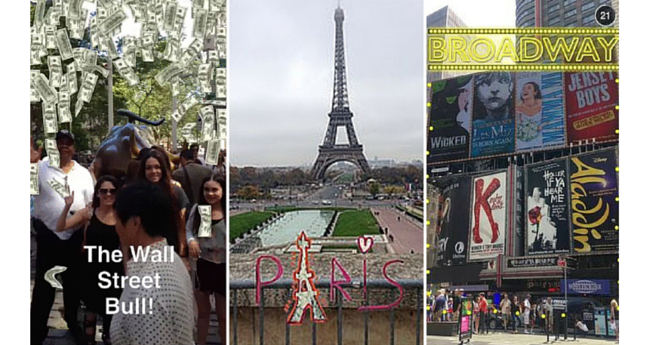 You can use different geofilters for various places on your Snapchat, depending on where you are.

These are custom overlays, designed by users, which are then only applied to Snaps and Stories within a designated geographical area. The minimum size is only 5,000 square feet or roughly the size of a single office building.

And then there’s the sponsored content, which is also currently Snapchat’s primary source of revenue.

Snapchat Mistakes That You Should Avoid Doing 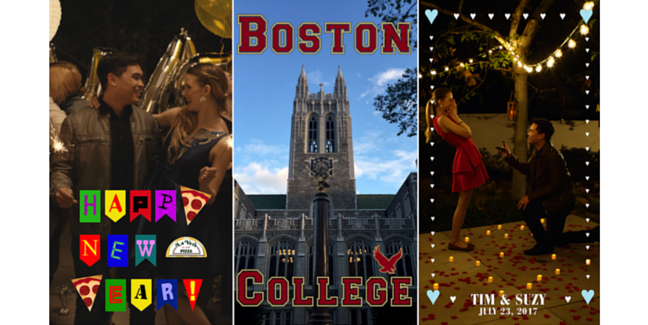 You can also create your own geofilters for as low as $5 by adding a special stamp with the name of a place, business or event to target your competitors.

Anyone can pay a fee to have their custom Geofilters applied to Snaps in a specific location for a pre-set amount of time.

If you’re running an event, you can also do it like how Billboard Music Awards 2016 did it. It gives your audiences a direct access to live event, even if they are not physically there.

Here’s a quick tutorial on how you can create your very own On-Demand Geofilters:

These are far more reasonably-priced than Sponsored Lenses, starting at only $5, making them a very attractive option for smaller businesses looking to increase their local marketing exposure.

Snapchat has been slowly building their Discover portal, which attempts to aggregate media from high-profile sources in a quickly-digestible Snapchat-friendly format. Currently, the Discover function is limited to a handful of top media companies, but they are exploring ways to open it up to more businesses in the future.

You can also check this video out to know more about the Discover function:

That is Snapchat in a nutshell. Now, let’s look at ways it could be used for your own marketing.

This section should be prefaced with a simultaneous warning and invitation:

Snapchat is terra incognita for marketers. There are very few hard studies into effective methods at the moment, and right now your own imagination is truly the only limit.

Opportunities to truly be a thought leader in online marketing are rare, but right now, Snapchat is full of such opportunity.

Fortune favors the bold on Snapchat, and those who succeed -while documenting it- will gain notice among their peers.

So, consider these mere suggestions to get you started:

Grubhub uses snaps with pizza slices disappearing to get the promotion code at the end.

Many businesses have seen great success using Snapchat to deliver short-term sales and coupons, which can be captured by users with their screenshot function.

Doing this on Snapchat gives it exclusivity, given the impermanent nature of the platform. It’s a blink-and-you-miss-it promotion. 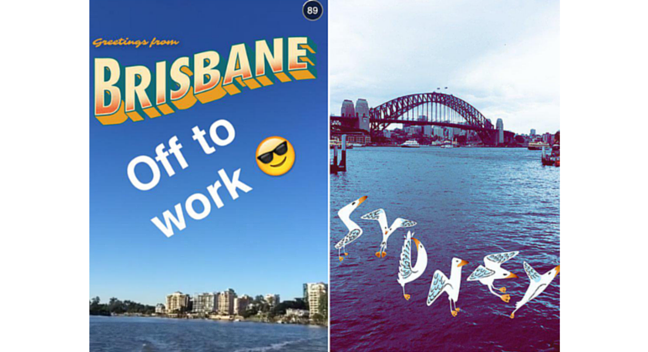 Geofilters are a great way for business owners to show their target audiences on where they are located at.

There’s a huge potential for local businesses in Geofilters and On-Demand Geofilters.

A restaurant could broadcast specials to its in-house customers, as well as those passing on the street. Or a movie theater could embed show times on pictures or trailer snippets from upcoming releases. It allows you to combine widely-popular images with highly specific targeted information. 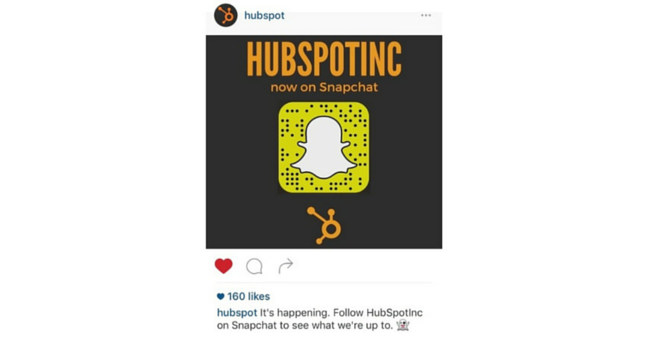 It is a good strategy to promote your Snapchat on different social media platforms for your followers to catch up with you, just like how Hubspot did.

Snapchat shouldn’t be used in a vacuum. Use your other social media platforms to drive users toward your Snapchat account, and also to alert users of upcoming limited-time promotions.

It’s vital to warn people ahead of time if a particular snap like a coupon should be saved since they’ll only have 10 seconds to hit their “screenshot” buttons. 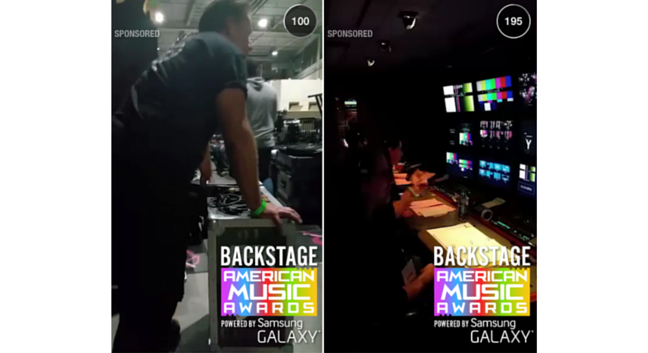 A highly-popular use for Snapchat Stories is to give glimpses of a day in the life of a worker, or documenting a specific process within a business such as showing the movements of products through the manufacturing process.

Business owners can also provide sneak peeks on what’s coming up next in the store and their latest products through snaps.

Remember, Snapchat Stories should be treated like stories, with a definite beginning, middle, and end.

Snapchats are fun! Even celebrities like Ariana Grande and Kim Kardashian are playing around with the lenses.

If the “puking rainbow” Lens didn’t tip you off, Snapchat does not take itself seriously. There’s probably no better social network for playing around and doing things you wouldn’t dream of doing in more permanent marketing mediums. Snaps which are wacky, silly, or just plain fun are highly valued.

6) Have PLENTY Of Variety

Other than just snapping, you can also doodle on your snaps as you like. Be creative!

Snapchat caters to the “digital native” generation who crave novelty and spontaneity above all else. Forget consistency; a spaghetti-against-the-wall approach is truly encouraged and rewarded.

Snapchat Has A Huge Potential For Your Business

In short, if you have a younger audience, Snapchat is a potential goldmine. Those who can embrace their fun and spontaneous sides have a lot of potentials to gain interest, viewers, and new leads.

Have you used Snapchat to promote your business or are you planning to use it soon? Do share your thoughts with us by leaving a comment down below! We’d like to know what you think.