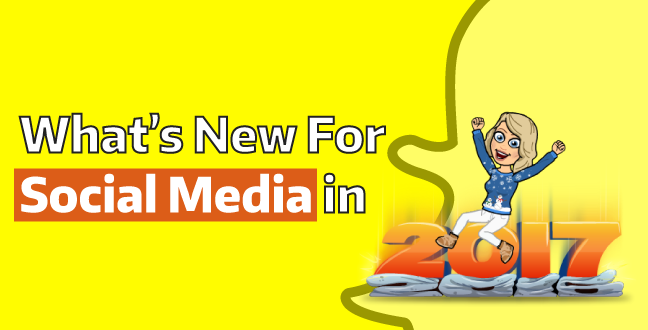 2017 looks to be an exciting year for social media. Evolution of social media is happening in almost every platform, and these will make a big difference to your social media marketing strategy. In a good way.

To start with, let’s reacquaint ourselves with 2016 social media trends, so we have a better idea of where we’re starting from as we gallop into the new year.

After that, we’ll dig into the big social media changes that have come through already, as well as some of the big ones on the horizon, so you have a good idea of what platforms deserve your attention.

Facebook has 1.5 billion users. In second place is WhatsApp with a billion users, and the next four down from there are all messenger apps.

Then you have Instagram in eighth place at 400 million and Twitter at ninth with 320 million. LinkedIn is all the way down in 20th place with only (well, “only”) a hundred million users.

Oh and this goes for market penetration in the US too, where Facebook increased to 89%. Facebook-owned Instagram is in 2nd place too, with just 39%. That drop off is steep. 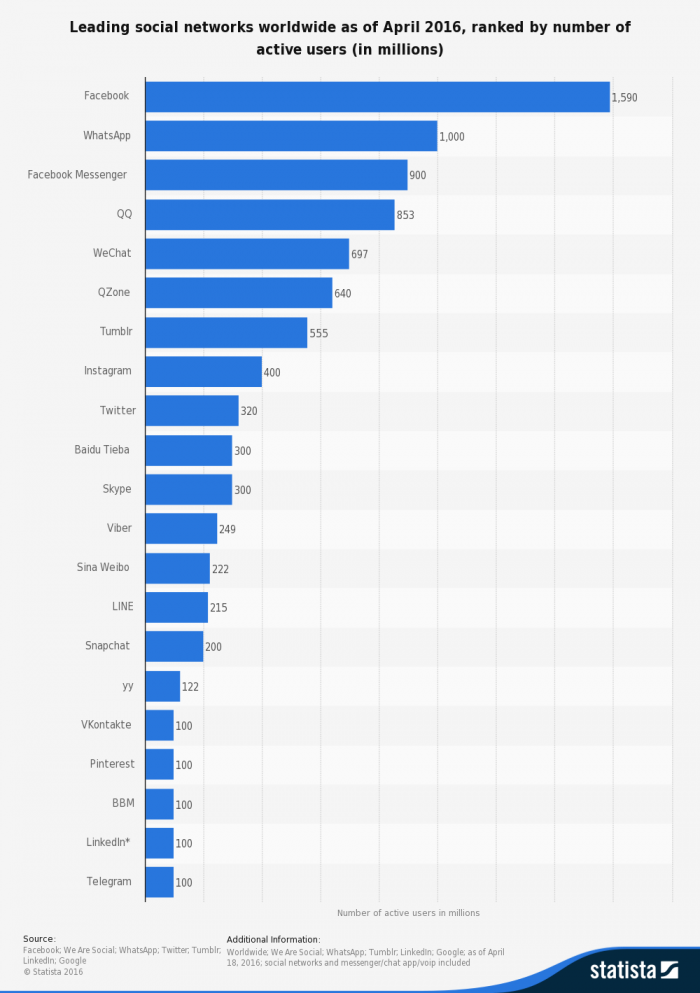 Facebook still keeps the lead for social media growth in 2017.

If you’re anything like me you were surprised to see Twitter so behind in the rankings. The reason for that is that it’s also grown the least since 2010. It increased 300 million in seven years, where Facebook increased by over a billion, and WhatsApp picked up 800 million. 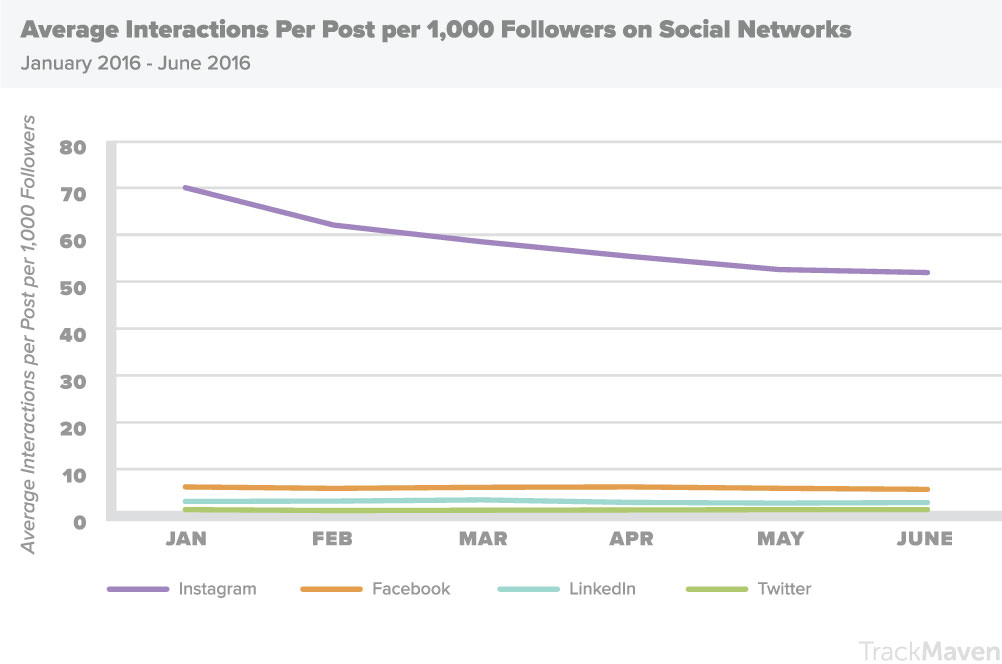 TrackMaven has shown that when it comes to interactions per 1,000 followers, Facebook and LinkedIn have relatively poor numbers with 6 and 3 (Twitter again comes bottom with just 1) while Instagram has up to 70! That ten times the engagement! Crazy.

There was a 10% increase in social media users, 219 million people. The largest number of these came from east and south Asia, markets which also spent the most time online.

Social Media Has Begun To Plateau (Everywhere Else)

75% of internet users in the US now use at least one form of social media. Brilliantly, it’s the over 65s who are now responsible for any growth, but it’s still tapering off overall. There’s been almost no change in the number of young people.

Well, wow. I wouldn’t worry too much about the last part – social media adoption may have slowed for now, but there are big changes coming in 2017 and these could well help break the stagnation.

Immediately you should be seeing how the relative fortunes of social media platforms are starting to vary, and how the social media marketing trends for this year are all responses to these new realities.

It’ll be interesting to see what changes have been announced already to see how these platforms are planning on competing for market share.

Let’s find out what we know so far.

New Social Media Features (And How To Exploit Them)

Facebook is trying to make it as easy as possible for businesses to advertise with them. They’re the undisputed king of membership but supporting them, and so much of their content, means they need to make their advertising perform better than it is right now.

The improved Audience Network means there’s never been a better time to spend your ad money with Facebook, as they can reach more people than ever.

Live audio will enable you to create ads or announcements, or even host live contests and Q&A’s with your audience, leading to greater engagement than ever.

Taken together, the advances mean there have never been more or better ways to increase audiences and generate leads. Diversification into these different methodologies will quickly tell you which are best suited to your aims.

LinkedIn is a niche website, but that niche is work, and work makes money.

If you’re involved in any kind of business to business activity, it might be worth giving LinkediN a second look now that they have geared the site more toward existing user behaviour across other social networks.

The network still offers pay per click and per impression advertising, as well as sponsored content, InMail direct marketing, and even account targeting. If you’d abandoned it before, it’s now worth a second look.

The big winner here is events. Posting events on Google + is unique because on Facebook they are limited within networks defined by who knows who.

One Google + the audience for these events can be defined according to who likes what, which makes a huge difference in attracting new audiences outside of your own bubble. That’s truly unique in Social media 2017.

Equally, it will help cultivate a richer level of audience interaction, and therefore engagement, to be able to easily moderate the comments left when you post your content to the site.

By being able to easily pick out the highly engaged followers, you can reinforce that engagement and make it far more likely to convert audiences into leads.

Finally, the new image feature will allow you to use high quality imagery to vastly improve your click-through rate, by creating a striking first impression that can dominate the screen.

The big news for brands is the ability to better regulate interaction with users and trolls, curb abuse both incoming and aimed at customers, and use the new mute and block features to their advantage, while preventing themselves from getting blocked by having clearer guidelines for interactions.

Being able to edit a tweet will be a godsend for many brands, who will be able to retain tweets with high levels of interaction even if a problem with it has been identified down the line.

Moments will give people an opportunity to stand out alongside major news stories, giving niche and novel products with contemporary angles the chance to shine alongside major world events, giving them a real reputation boost.

The game changer here for you as a business user is discovery. With the search function finally in place, and related recommendations already coming up as part of it, your chances of being discovered through related searches is higher than ever. Excellent.

The Bitmoji might be a little more lateral, but as its part of the design language for the website, it’s a good idea for your to get on board. After all, it’s an opportunity to show your brand as playful, game, and down-with-the-cool-kids.

Global stories gives you the ability to cash in on current events in a similar way to how Twitter does with hashtags, but in a much richer way. You can show support for certain events and condemnation for others in accordance with your brand values.

Showing you believe in things is a great way to establish a personality and a following. You make your business part of a culture, and a tribe.

That’s All… For Now

I’ve recapped most of the big shifts of the most active and useful social networks out there, which I hope will give you some insight into the kinds of opportunities there are for you to seize.

That said, it’s FEBRUARY. I’m sure there are going to be a lot more updates to the major social networks between now and the end of the year, and that means you always want to keep an ear to the ground to see what the latest occurrences are and figure out how you might be able to make the most of them.

The key takeaway from this overview for me has been that Facebook is the biggest because it works the hardest – way, WAY more features for businesses and all with a focus on connecting them with audiences in ways that will work.

The other companies on the list are making strides, sure, and in particular Google + seems to be reinventing itself in response to the changing way in which it’s being used, but if you had to pick one market to focus on, you can guess what my pick would be.

Have you identified any big social media changes that aren’t on the list? Or have you noticed something out of the ordinary in your feeds that seems to point to a new trend? If so, drop it in the comments below.

Otherwise, get out there and make this your best year in social media marketing yet!