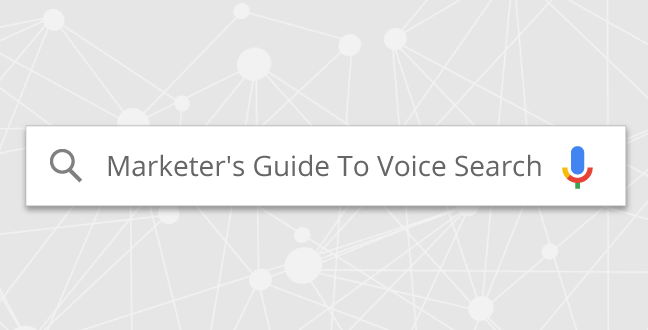 Have you talked to your computer today? If not, you may actually be in the minority. A surprisingly quiet (given the subject matter) revolution in the nature of web-searching and SEO has been going on for the last few years, one which has gone surprisingly under-reported in the world of marketing.

That revolution is, of course, voice search and other voice-driven computer interfaces.

Exact numbers are hard to come by and tend to vary significantly between surveys, but reports in the area of 40-60% of users actively using voice interfaces are common. One thing that’s not under dispute is that usage of voice commands is rising, and fast. Even if we’re not quite to the point of a true majority of computer or smartphone users utilizing voice systems, it’s virtually guaranteed to happen within just a couple years.

It’s certainly having an impact on search patterns. 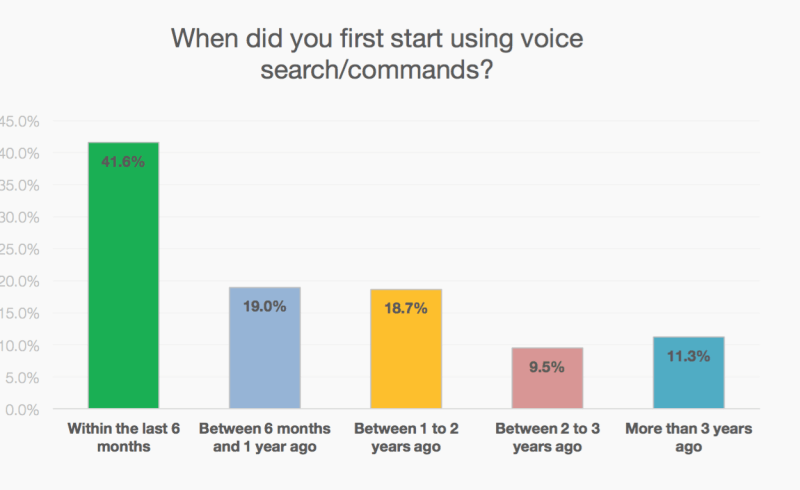 Both Google and Bing are reporting that 20-25% of their searches are now voice-based, and both are expecting those numbers to rise in years to come.

Predictions that over half of searches will be voice-based by 2020 are hardly absurd.

What this means is that online marketers need to be thinking about voice search: how it’s changing search methods, and how Virtual Assistants –much like their human counterparts– are becoming gatekeepers to information for their bosses.

SEO is always having to adapt to fit new tech trends, and voice may be one of the most disruptive changes yet. (If you would like to know about social media trends 2016, we have it for you as well!) Soon enough, there will be voice search SEO.

A Quick History Of Voice Interfaces

Yet it’s been a long road making sci-fi dreams into reality. In 1970, machines could only recognize words with about 10% accuracy. It took until 2010 for that to grow to 70%, and by last year, it was up to about 90%. Obviously, 99%+ is the goal, and at the rates of change we’re seeing, it won’t be long until that’s a reality. 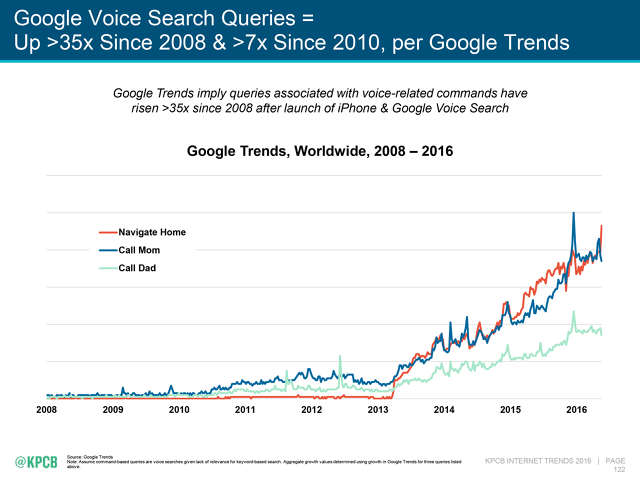 In the meantime, Google voice queries have seen a staggering 3400% increase since 2008.

This has almost certainly been enhanced by the equally rapid rise in “second-screen” device usage. If someone has their smartphone or tablet laying around nearby, it seems downright natural to use it in a secondary role. Especially if one’s hands are otherwise occupied.

In fact, I’m doing it right now, running “OK Google” voice search on my Android tab to look up statistics as I type on a laptop.

Say “Ok Google”, and it will tell the Google app that you’re ready to start using your voice.

How Users Are Utilizing Voice Search

A study into voice utilization that we reported recently brought a lot of insights into how and why voice commands are used by people. There are actually a lot of different reasons why people are using voice commands. 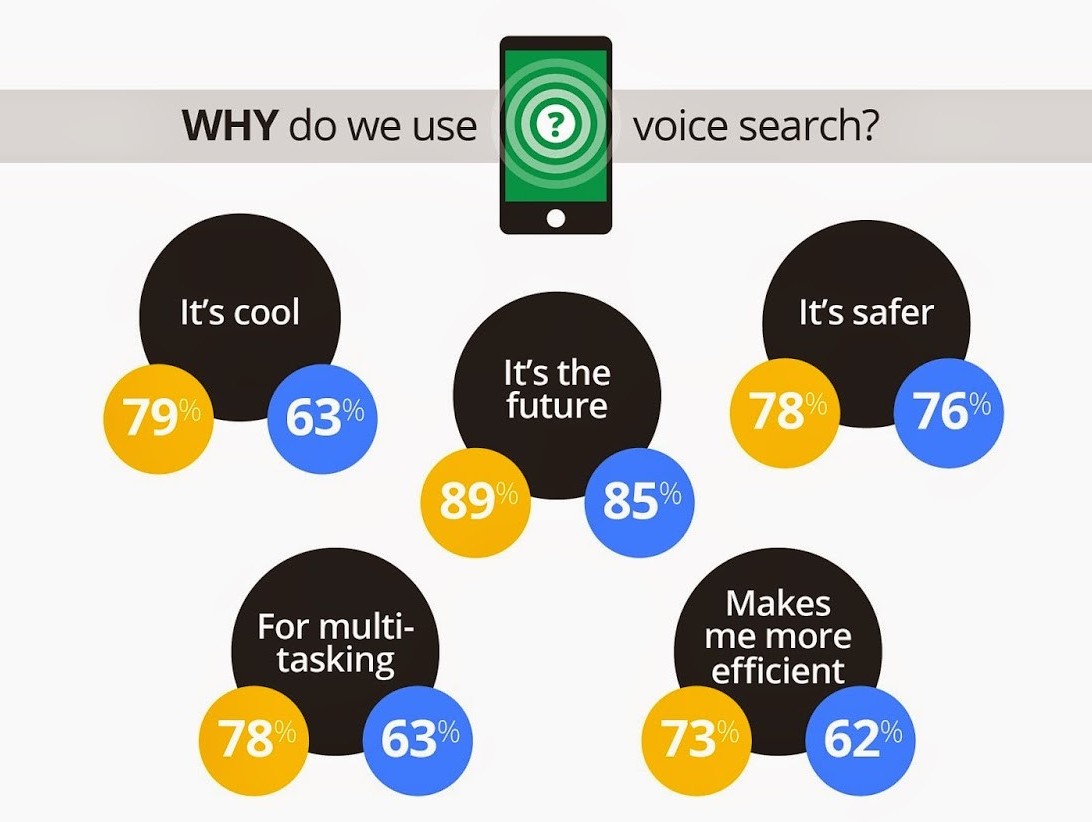 All of the reasons had more than 50% responses.

Whether in the bathroom, watching TV, or cooking dinner, people are finding more and more ways to integrate voice interfaces into their everyday lives. And they’re using it for everything from playing music to shopping to finding driving directions. 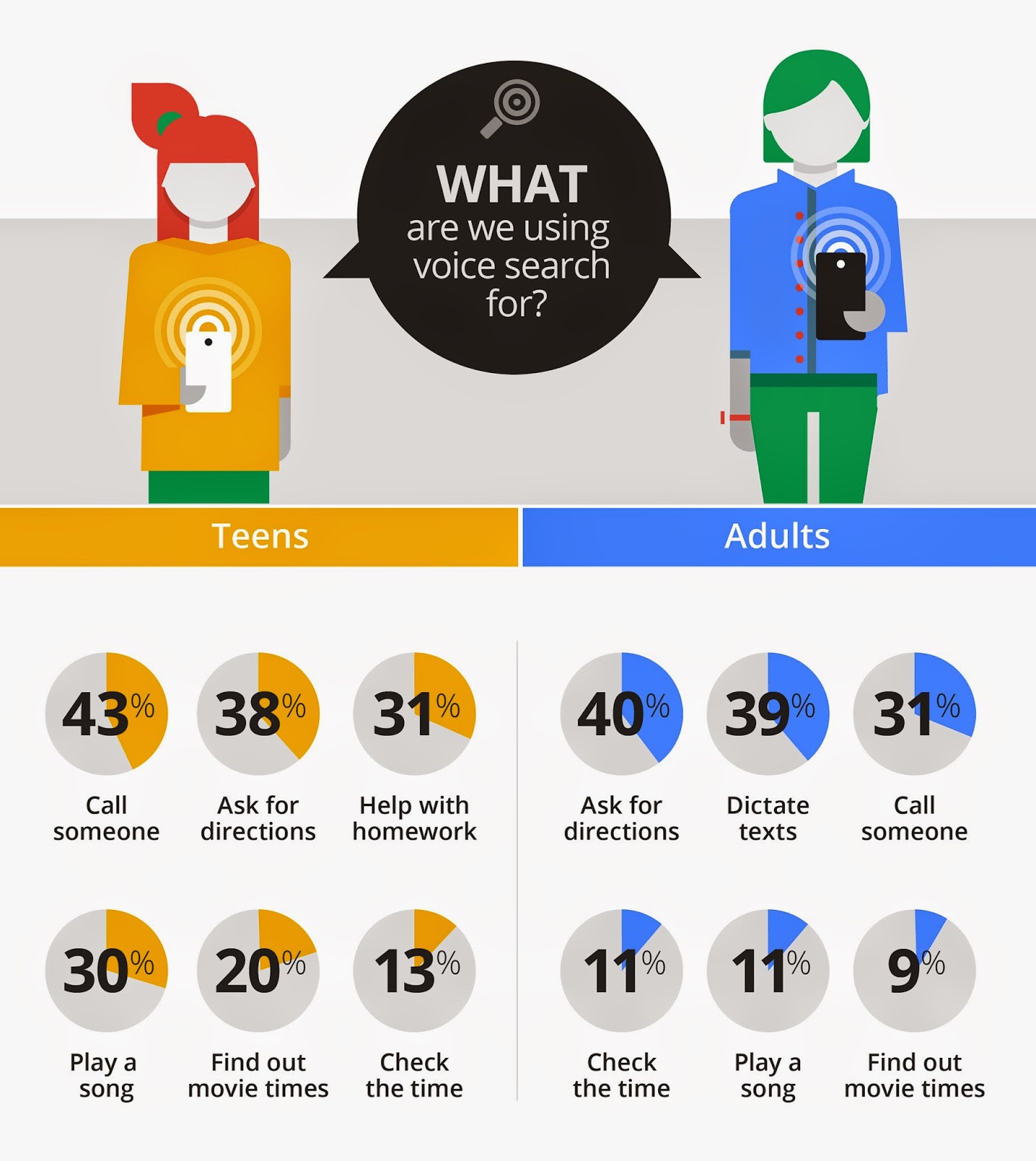 More than anything, however, they want instant answers. If someone is on the road and looking for a nearby store, they aren’t going to scroll through pages of hits. They’ll expect the answer to their question to be at the top of the list.

Now, there is something of a division that’s shaping up in terms of how people are using voice interfaces.

Most of the statistics quoted so far have applied specifically to voice-based searching, applications like OK Google where voice is simply used as a substitute for typing. However, the other side of this trend is the rise of the Virtual Assistant, programs like Apple’s Siri, Microsoft’s Cortana, and Amazon’s Alexa which are attempting to utilize Artificial Intelligence (AI) to fill a role much like that of a human assistant.

While uptake of Virtual Assistants has been slower than voice search, Gartner predicts that at least 20% of all smartphone interactions will be using VAs by 2019.

This is a bit hazier and harder to predict because it’s going to entirely depend on how quickly the companies creating VAs can enhance their usability. They’re currently still a bit flaky for all but the most basic of applications. However, with literally billions of dollars now being poured into various VA or AI efforts, this is another area where rapid growth seems inevitable.

So, now let’s get down to the nitty-gritty: How do these two major trends in voice usage – voice search and Virtual Assistants – affect your SEO and marketing plans in 2017 and the years to come?

Adapting Your SEO To Voice Search

When it comes to making voice-friendly SEO, there’s just one word to remember: humanize.

For a couple years now, smart SEO marketers have already been focusing more and more on natural-language queries. It’s becoming common wisdom that most inbound marketing content should be focused on answering questions, in particular, questions which people are asking of search engines like Google and Bing.

Someone isn’t going to voice search for: 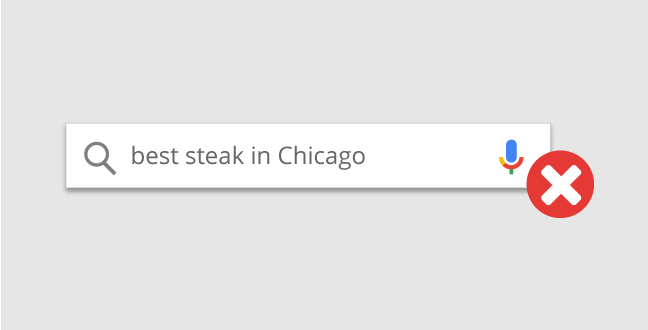 Instead, they’re going to say, 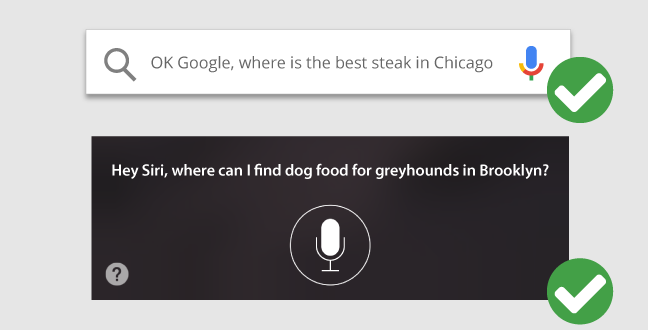 Also, notice how long-tailed keywords are implied by these sorts of searches? People will be searching for their specific needs. So, web content needs to be optimized around natural-language inquiries and ways of talking.

This may even need to incorporate more slang and informal language. A quick Google voice search for “cool clothing stores in San Francisco” did indeed bring up several hits featuring the word “cool” prominently, and map hits prioritizing stores describing themselves as boutiques.

It’s reasonable to assume that younger searchers, particularly Millennials will be most likely to use slang or informal language when talking to their computers. 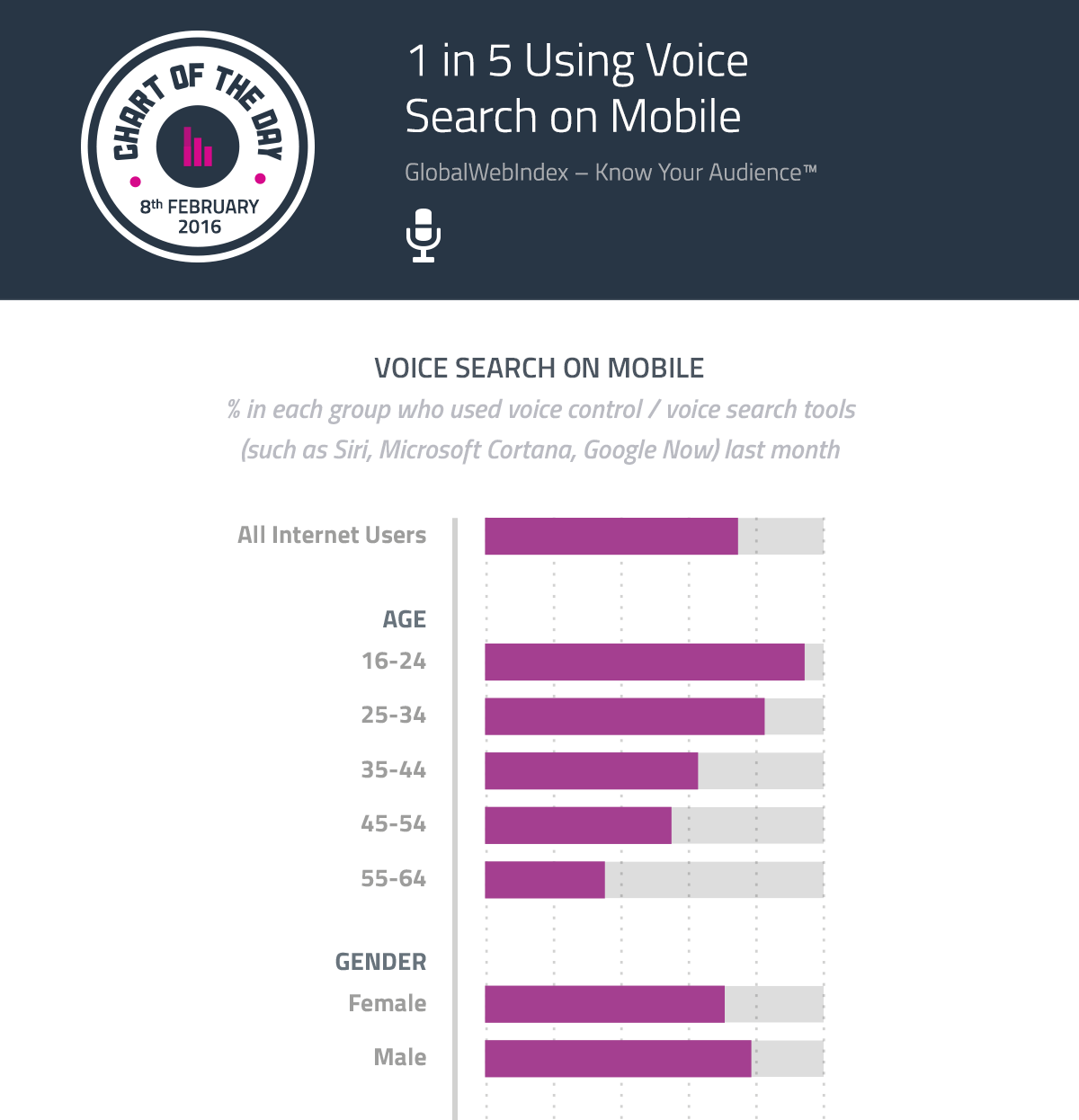 Plus, in accordance to users’ desires for instant answers, the answers to the questions they ask should be near the top of the document. Don’t hide the desired information – they won’t bother looking for it.

A savvy marketer will also want to start looking to differentiate between which members of their audiences are more likely to be typing versus using speech. 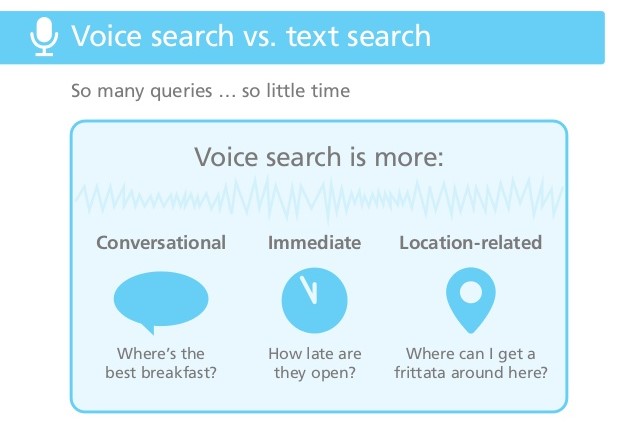 They might even think about creating different pages with different keyword optimizations, depending on how each market niche is searching.

So, to summarize, smart voice search SEO should:

Don’t forget you can use SEOPressor to quickly check and evaluate your on-page optimization! 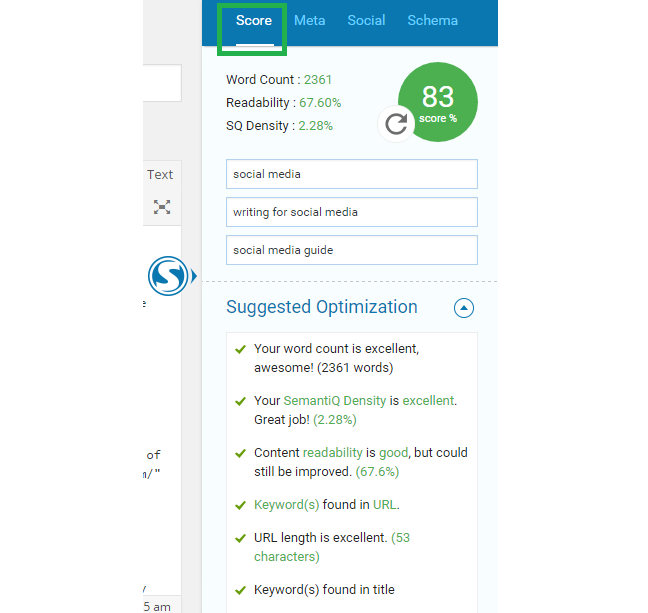 SEOPressor is like a checklist for us to analyze the steps that we’ve overlooked to improve our on-page SEO.

Getting On The Good Side Of Virtual Assistants

Finally, let’s look ahead a bit.

This section will be a bit more speculative since usage of VAs is still in its infancy, but it’s not hard to predict a few things about how they are changing device interactions.

This will create major new challenges for online marketers. It’s entirely likely that by 2020 or so, “Virtual Assistant Optimization” will be the new SEO. If, in the near future, a user becomes able to say “Hey Siri, order me a pepperoni pizza!” and have the VA handle everything else, how do you ensure your pizzeria is the one the VA orders from?

At the moment, focusing on local search optimization will be one of your best bets. It’s fair to assume VAs will prioritize proximity and review scores, rather than merely defaulting to big-name chains.

Likewise, you may want to start gathering information on which devices your customers own and use, specifically so you can start tailoring your on-page optimization and local search efforts to their associated VAs. For example, Amazon is partnered with Yelp, so focusing on Yelp would be a good idea if your customers are Echo adopters.

Finally, keep tabs on the ongoing development of the major Virtual Assistants. Siri, Cortana, Alexa, and Google Assistant are the Big Four at the moment. 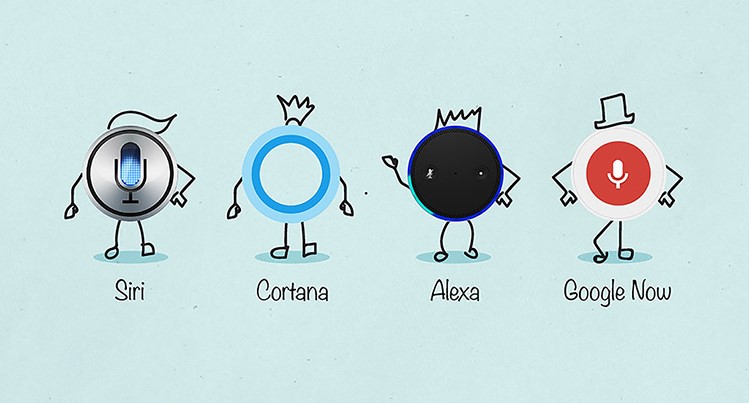 They’re all jockeying for prominence, so they’ll make announcements of new features, applications, and APIs.

Such announcements would inform your decisions on how to target their VAs going forward.

This is very much “wild west” territory as far as marketing goes, and as VAs becoming increasingly common, there’s going to be a scramble to find ways to gain their favor. Anything you can do to stay ahead of the curve will pay off.

What Do You Think?

Voice search is becoming a big deal, and it’s almost undoubtedly changing SEO in years to come. With this, I believe that Google will have more algorithmic changes in the future to improve the user experience.

How are you planning to adapt, and what voice search SEO strategies do you think will be useful for climbing the rankings? Let us know!

If you’re a content marketer learning about SEO, here are the SEO preparation that you need to know.