What Is Niche Marketing And Why Is It Effective? 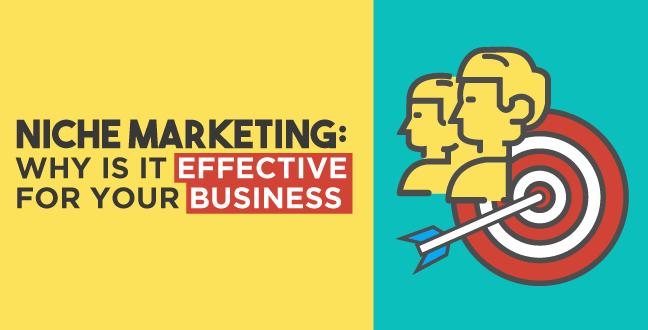 Have you found your niche? If not, it may be time.

Of all the many changes that online marketing has brought to advertising in general, one of the hardest for people to wrap their heads around is the sheer scale of the economics involved. Marketing online is, in many ways, the exact opposite of any sort of local advertising.

After all, while estimates vary, it’s generally agreed that, as of 2016, between 3 and 4 billion people are online.

The amount of people online is increasing every year. The Boston Consulting Group has predicted that there will be 3 billion people online by this year (2016).

In other words, roughly half of the entire human population. Likewise, estimates for the number of exclusively online businesses are in the tens of millions, not even counting all the mixed physical and online operations.

This has created a buyer’s market like never before. Customers –both B2C and B2B– are fully aware of just how many options they have in every possible field of business. Even businesses with a wholly local focus face competition from online shops in most situations.

It also creates an amazing opportunity for virtually any operation with an online presence, but only if they understand and embrace niche marketing.

What Is Niche Marketing?

Simply put, niche marketing abandons ideas of mass marketing, in favor of focusing on the needs of a highly specific target group.

Ideally, that niche has a particular desire which is not being addressed by any of the more mainstream options available. However, niche marketing can just as easily target cultural sub-groups, philosophies, politics, pop-culture trends, location, physical traits, or virtually any other criteria by which some buyers distinguish themselves from everybody else.

In effect, a niche market is a subset of a target market. Let’s say you begin with a large target market such as urban professionals and then, like a woodcrafter, you start to ‘whittle away’ those who are least likely to be interested in your product until a small tightly-focused core group remains.

If you’re offering a product they can’t get from anyone else, backed by marketing and messaging that speaks to them directly, they are basically yours for the taking.

For any business smaller than “multinational”, niche marketing can be the tool that makes the difference between middling sales and significant growth. There are many potential benefits, both in terms of direct sales potential as well as streamlining your own processes. 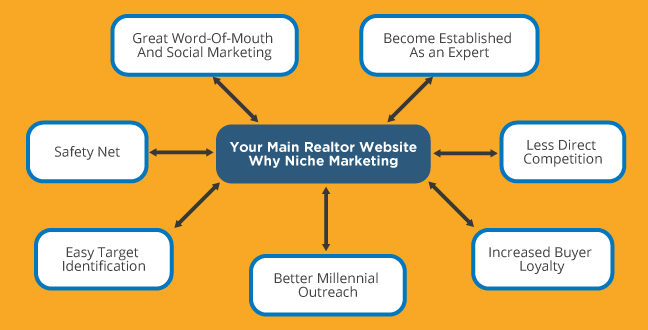 Niche marketing has many advantages that you can use for your business.

This is the biggest and most obvious benefit of niche marketing, especially in fields dominated by major global players. You are targeting one or more groups that they are overlooking with their mass-appeal focus.

Because you’re focusing on such a small subset of the market, they are extremely easy to identify and discover. Likewise, lead qualification is greatly simplified.

3. Become established as an expert

If you’re the only company offering left-handed tools for IT professionals working on high-end servers, you can quickly become the name to trust in that field.

Once you’re established, word of your business and focus will spread quickly among your niche. The better you target them, the faster it can happen.

So many buyers in all fields tend to have little loyalty, specifically because they have trouble finding a product or service that’s for them. If they come to see you as truly understanding their needs, they’ll be extremely loyal.

Most Millennials’ attitude towards traditional mass marketing is somewhere between repulsion and flat-out hatred. Successfully reaching out to the youngest and largest buying demographic means catering to their needs. Niche marketing is practically essential for courting less than 30 buyers.

As long as the niche exists, you have customers. Period.

After all, just look at it this way: There are over 3 billion people who might see your website. How many of them do you really need as customers to succeed and grow in a sustainable fashion? A few thousand? Even a large company would be happy with a million.

Find the right target niche, and life becomes so much easier.

This is something of a “high-minded” topic. After all, we can’t possibly tell you who the right target niche for your product is. However, we can provide some examples of niche marketing and discuss how/why they work.

Sometimes a company finds a niche just by doing what it does best.

Despite a plain-jane name and a website straight out of the 1990s, Vermont Wooden Toys is so successful that most holidays they have trouble keeping up with demand.

Between parental fears about too much technology in their children’s lives, constant recalls of dangerous electronic gizmos, privacy concerns, environmental issues, and old-fashioned nostalgia, there’s a huge demand for traditional hand-crafted wooden toys.

They’re also aware of their changing clientele, and changing their products to match. Last year, they switched to using no artificial sealants on their products, specifically to cater to environmentalists.

Speaking of “left-handed IT professionals,” I didn’t just make that up.

Left-handers are roughly 10% of the population, and almost entirely under-served as a market. On a global scale, that’s a lot of lefties – and Lefty’s Left-Handed Store leverages them. They’re the top Google hit for “left-handed store” and “left-handed tools.”

With a full lineup of products of all sorts, along with various “lefty pride” paraphernalia, they are basically the perfect case study in how to capture a niche everyone else has overlooked.

While the recent Presidential victory of Donald Trump suggests that a lot of companies will start looking to court right-wing buyers, few have done it as successfully as Chik-Fil-A.

This mid-tier fast food chain has leveraged its conservative political slant to create a fanatically-devoted customer base. From their Christian-inspired policy of closing on Sundays, to the owners’ unapologetic opposition to gay marriage, they practice what they preach – whether one agrees with them or not.

Further, attempts at boycotts from the left have actually backfired, increasing support and sympathy for the chain among their devoted fans. That’s what can happen when a company truly claims a niche.

Powell’s Books bills itself as the largest independent bookstore in the world, and has also been named by CNN as being one of the “coolest” bookstores in the world.

They’ve also been online pioneers, establishing a presence all the way back in 1993, before the “world wide web” was even a thing. They now do thriving business at both their physical Portland, OR, locations as well as online.

While they’ve had small setbacks in recent years thanks to steep declines in the publishing industry, they’ve fared far better than many other brick-and-mortar bookstores. By being cool and ahead of the trend curve, they’ve remained while huge corporate competitors have fallen by the wayside.

Finally, let’s look at one of the most famous instances of anti-advertising at the moment. In fact, it’s technically not even advertising at all because the creator has nothing to do with the brand: The satirical Nihilist Arbys Twitter account.

Despite constantly posting things that would horrify most corporations and possibly lead to legal threats (such as “Whatever. Cut up more animals. Eat Arbys.”) Nihilist Arbys became a phenomenon among younger diners and almost certainly helped elevate the brand.

The writer discovered what Arbys’ own marketers failed to realize: to reach out to youth, one has to speak their language, even when that language is drastically different than corporate speech.

So, those are the basics of niche marketing, but let’s also address a couple other questions quickly:

How Does Niche Marketing Differ From Shock/Controversy Marketing?

We discussed controversy marketing in some depth in a previous blog. And there could be some overlap, particularly where contentious issues are concerned such as Chik-Fil-A and gay rights. However, the key difference is roughly the same difference between a fad and a lifestyle.

Controversy marketing has no long-term plan. It’s a deliberate stunt aimed at achieving a single particular goal. Niche marketing is about picking a group and staying with them in the long-term, only changing tactics if there are major buyer or market shifts that necessitate it.

But What If I Outgrow My Niche?

This is one of the biggest objections some companies have to the idea of niche marketing: It can feel limiting, at least at first.

However, even a “small” niche can easily be grown. Think geographically.

If you’ve captured all the left-handed IT pros in the USA, start looking to Canada or Europe or Asia. Likewise, it’s also often possible to modify the core niche without abandoning it. Imagine if Lefty’s started a section of their site targeting those who are missing a hand, or both. It would still fit into their overall vision of providing tools for people overlooked by other tool companies.

A little creativity would make it relatively simple to keep growing a niche almost indefinitely.
Otherwise, if a company truly grows to the point they have “no choice” but to start looking at mass-marketing options to continue that growth, well, may we all be burdened by such troubles!

They’ll have still laid a strong foundation and built on it for many years.

The Bottom Line: Get Niche

In our opinion, there is no better or more effective potential strategy for an SMB to grow itself than to look for a precisely-targeted niche. The potential for gains is huge and so long as that niche is well-researched there are relatively few drawbacks. Especially when the alternative is competing directly with 800 pound gorillas that operate on a global level.

Think smart about thinking small, and you can build big.

So what do you think? Is niche marketing effective for your business? Are there any tips that you’d like to share with us? Leave a comment down below and get connected with us!

Inbound vs Outbound Marketing – Which Is More Effective?Ecommerce Content Marketing: 7 Reasons Why You Should Start NowBlack Friday And Cyber Monday: 6 Marketing Strategies For Your…
Loading Disqus Comments ...