5 Google SERP Features That Can Give You Tons of Traffic

With how dynamic the SERP results (Search Engine Result Page) has become, there’s actually much more than being ranked first. Now, there are more ways to appear on the Google SERP other than being a blue link. Especially more so on mobile.

So today I’m sharing with you a list of SERP features that you should target on. Five plus one extra. 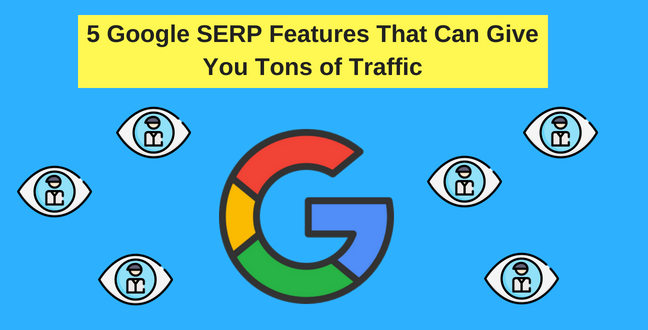 What are SERP features?

Other than the standard blue links, Google is offering us the users so much more.

You can type in square root of 48 in the search bar. You will get a calculator with the answer on it. Which is pretty cool and convenient. When I asked Google how old is Obama, other than an instant answer, there is also a list of prominent figures related to Obama with their ages attached. 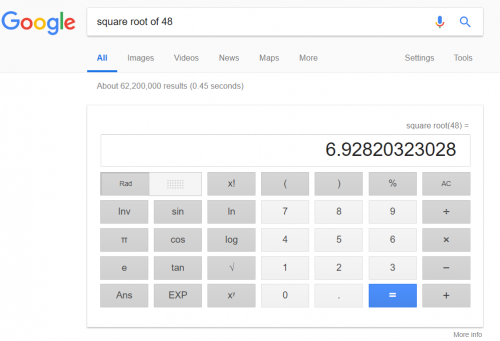 Google whips up a calculator to answer your math question.

What this means is, Google is getting better and better at giving the users what they want. And they know a list of blue links on a white backdrop is not going to cut out any longer. That’s why they introduced and constantly updates a bunch of SERP features.

Now, you might think why does it concern you? Well because you can actually take advantage of some of those unique SERP features and give yourself more exposure. Therefore, gaining more traffic. 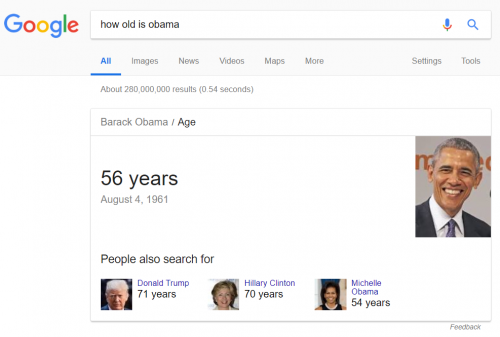 Well I didn’t asked for Trump, Clinton or Michelle Obama’s age. But it’s nice to know anyways, thanks Google!

Fighting for the page one rank is proving to be getting much harder than before. That’s why we’re gonna fight smart.

Let’s get started with the 5 SERP features that can give you tons of traffic. 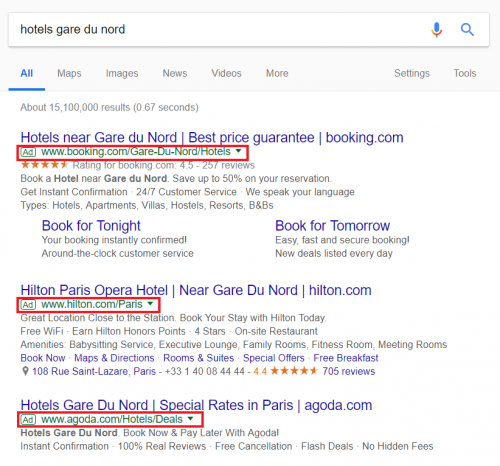 This is a no-brainer. Wanna get listed on page one, even higher than the number one ranked organic result? Well, Google got your back, provided you pay them some money (oops).

But if you think placing ads is as easy as paying and watching traffic trickling in. Think again. Planning an AdWords campaign is actually an intense game of keyword researching.

Just like trying to rank for your page, you need to identify the point keywords. Or even better, niche keywords that will get you dedicated and relevant visitors.

There are two types of keywords that you can target. Short tail keywords may have more search volume, but they are also highly competitive and expensive. While long tail keywords need you to do more in-depth research and they might not drive that much traffic. But what you are going to get are dedicated visitors.

You might think, is it worth it to pay that much money for ads? Well, ads have been around for decades and it is not going away. I would recommend fresh business that needs some exposure to use ads.

Content and inbound marketing are great. But when you can’t afford the “slow and steady win the race” method, placing some strategic ads is gonna help you boost the traffic, and build an audience. Hey isn’t that OUR article?

Ever heard of the featured or SERP snippet? Do you wonder what is SERP snippet? Well, ever searched for something and got a little box of information on top that answers your question right away? That lifesaver is the featured snippet aka another spot on SERP that you can grab.

The featured snippet is curated by Google Knowledge Graph from their library of indexed contents. In order to answer a specific query, Google extracts and reformats relevant information from a single page that has the most fitting answer. Then dumps (well, perhaps more gracefully than dump) it into a box on the top of SERP.

Also called position zero, featured snippet is placed right on top of the SERP. Yes, even before the number 1 ranked web page. According to HubSpot, the featured snippet has almost two times the click-through rate compared to other links listed in the SERP. Which means a whole lot of traffic. 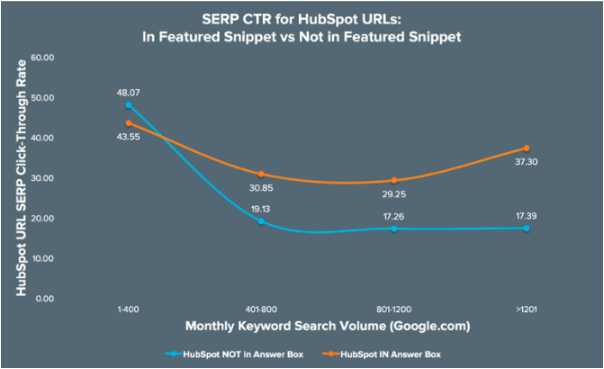 Click through rate for featured snippet is almost twice as much.

Now that we know how much traffic featured snippet can drive, how can we get that spot?

If you have an article that’s at the top 5 spots on SERP, you are already halfway there. Now all that’s left is to ask yourself. Did your article answer the question in a straightforward and concise way?

Well, Google is smart, but it doesn’t mean they don’t need a little push. Editing your content a little to help it fits in the box will go a long way. Both for your visibility and traffic. Now go get that featured snippet spot.

Infographics and graphs tend to do well on image search.

A picture is worth a thousand words. There is a reason why the image tab is right beside the all tab on the SERP. Image is actually one of the regular features of SERPS that is largely ignored. 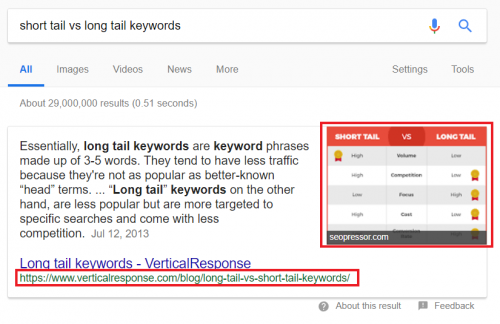 Your image will also make it into the featured snippet box. Note that the snippet itself is extracted from another website.

So if you can sketch up a mean infographic or graph, with the perfect ratio of graphics and information, you might have just gotten the key to unlocking a bunch of traffics. Moreover, if you’re an interior designer, hotelier, jeweler, or even a pâtissier, where being able to show your work is important in securing clients, targeting Google image ranking will definitely help.

Now, how can you optimize for Google image searches? If you are into SEO you are probably aware of how important image ALT is. If you want to rank for Google image, there is a list of optimization that you need to do. 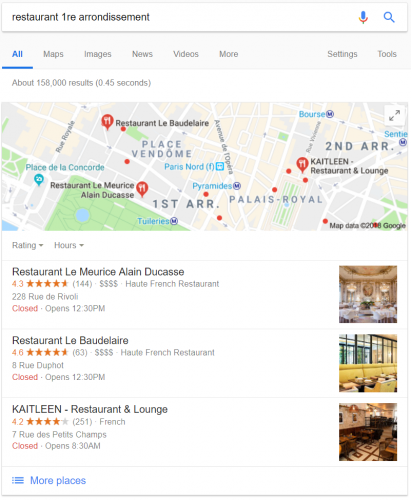 One of the most frequently used format on Google search is … near me. The ellipsis could be a restaurant, a plumber service, a hardware store. Basically, any local businesses that are in a close proximity to the user.

Being listed on local search pack is important for small local business cause that means tons of exposure.

Google will basically try to list all the local businesses. But you need to claim it in order to optimize it and use it to your advantage. In the rare case where your business is not on Google’s radar, simply create it. Here is a guide on how to get started on Google My Business (GMB).

After setting up your GMB account doesn’t mean the job is done. The most important factor of this SERP feature is, of course, the proximity of your listing to the user. However, there is also an extensive list of information and setting that you can set up to increase your ranking.

Moz compiled a list of Top 30 Foundational Factors for you to rank on the local search pack. If interested, you can read on their extensive local search ranking factors.

Google tries to give the best answer to every query, and they try hard. People also ask is one of the SERP features where they try to give the user the most detailed and relevant answer. By suggesting you what similar questions other have asked. 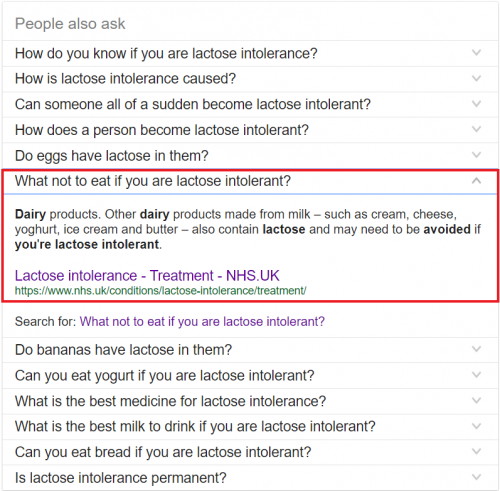 Google shows you the answer when you click on the respective question box.

Sometimes, the answer presented is actually the featured snippet of that exact query. Some other times, they are not.

We are not sure how Google decide which to feature and which to not feature. However, one thing that is definite is the page gotta answer the question. 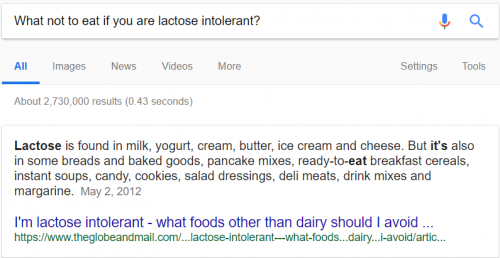 The actual featured snippet of the exact People also ask query in the actual SERP is not the same one displayed in the question box. 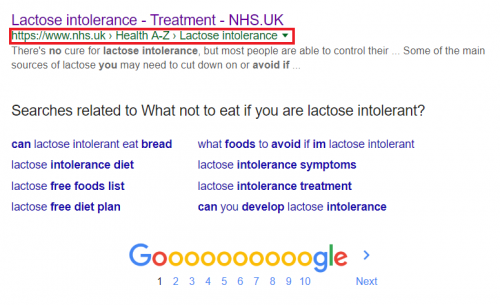 The answer featured in the People also ask box is actually extracted from the 10th link of the SERP.

Like all quality content, you need to have a solid and concise writing that is relevant to your targeted keywords.

People also ask, like featured snippet is placed above the organic 10 blue links on white background. That means a whole lot of exposure and also a whole lot of traffic that could be yours. 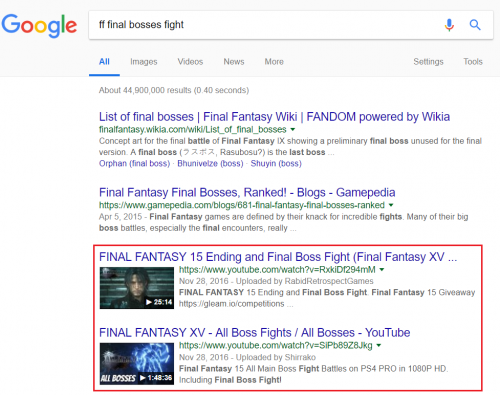 Youtube is a Google propriety which means it makes perfect sense for them to be featured on the SERP. Featuring videos in the SERP is one of the steps that Google has taken to give a more dynamic result. Some things are just better explained in motion and utterance.

Now, there are some queries out there that can trigger a SERP with half of the results being a video from YouTube. There are also some queries that won’t show you a single video at all.

Informational videos, tutorials, how-tos, reviews and entertainment queries are the most likely to trigger a video result.

So how do you link the youtube videos back to your main website and gain traffic? Make good use of the description box function. Or mention your domain in the video. Videos can be a good way to build up your brand image and authority.

So it might not have a direct impact on your website’s organic traffic. It is another way to gain a place of the Google SERP and spread your brand name.

Here’s a quick slideshow to help you refresh what you have just read. Now go get those traffics!