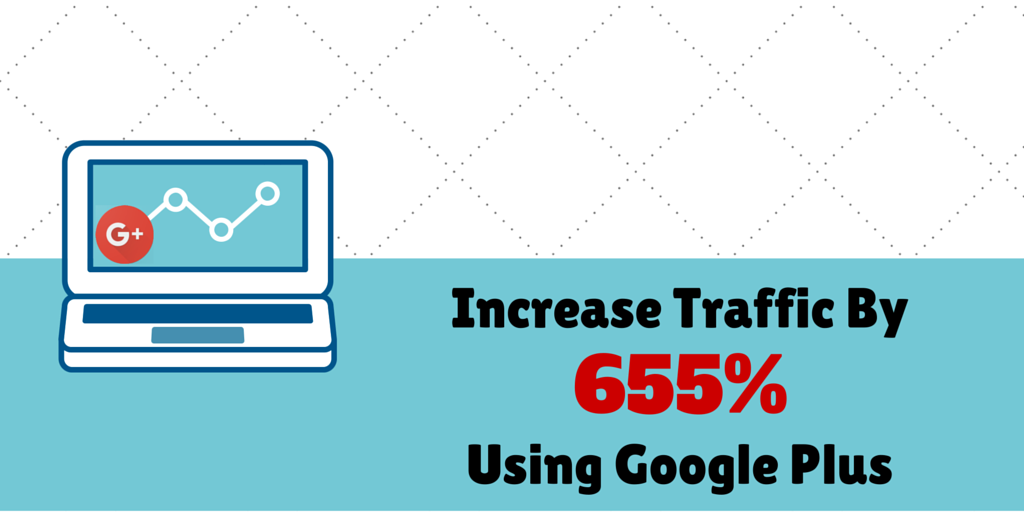 It’s been a little over 6 months since I started doing content marketing and I can say that I’ve grown quite a bit since then. There are many ways to measure growth when it comes to content marketing. But here at SEOPressor, we mainly look at organic traffic as our measuring stick.

While promoting your contents can net you a lot of referral traffic, organic traffic is a bit harder to influence. Earlier on I tried a combination of SEO, promoting contents through email and social media sites to increase incoming organic traffic. But that yield very little result.

That is until the day I noticed how sharing in Google Plus communities affects organic traffic tremendously. Since I started doing it, organic traffic to my contents increased from 137 to 873 per month only in 3 months!

Organic traffic only improve when I start to share on various Google Plus communities.

So if you still haven’t started doing it yourself, here’s some guide on how I manage to pull it off. I’ll first start by sharing my observation on the effects of Google Plus sharing, followed by my speculation on the reason why that happens. Afterwards I will share the methods I did to do my sharing.

You can straight away jump to the “How to post in Google Plus Communities” part if you aren’t interested in the case study.

We know that social signals are among the ranking factors Google uses to rank websites. That’s why I started with sharing my contents on multiple platforms – Facebook, Google Plus, Twitter and LinkedIn just to name a few.

And even though they managed to get a decent amount of shares and likes, there are not much effect on organic traffic. 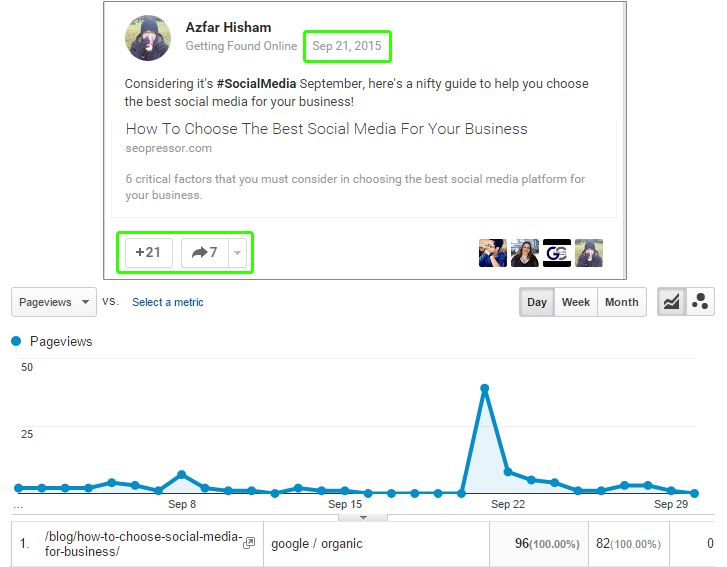 Organic traffic spiked on the day the article is shared on a Google Plus community.

An very clear example is an older post of mine. I have stopped promoting it for quite a while until I saw an opportunity to reshare it in a Google Plus community. Just by sharing once, a very apparent spike in organic traffic instantly occur. It also quickly dwindle down the moment the share start to get less interaction. 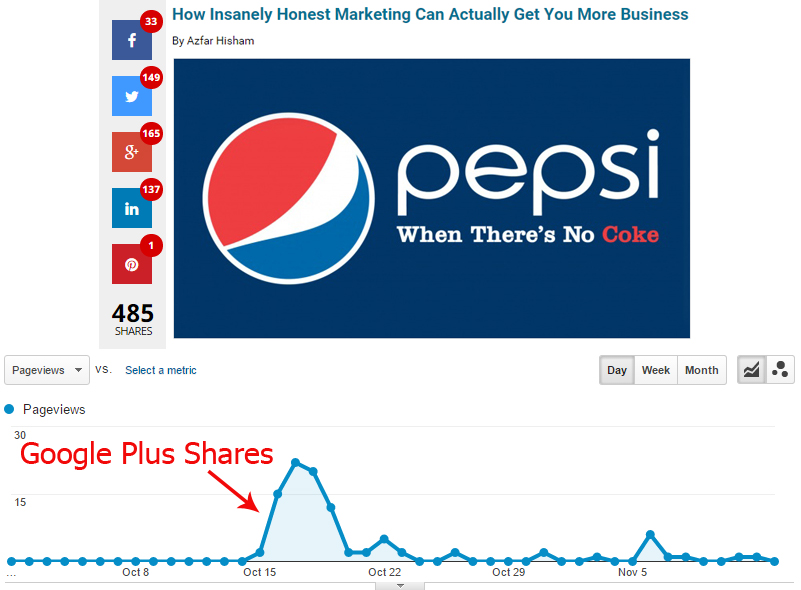 Compared to some of my other article that manage to get huge amount of interaction on LinkedIn and Twitter, the organic traffic stays more or less the same. The spike still only happen during the sharing on Google Plus. Despite the Twitter and LinkedIn shares came a bit later, they are not reflected at all in the amount of incoming organic traffic.

Earlier on I was suspecting that maybe being a Google product, traffic from Google Plus counts as organic traffic. But it’s clearly not the case since they are still counted as referral. But somehow they correlate so well with organic traffic.

Then the conspiracy theorist in me thought that maybe it’s a ploy by Google to promote Google Plus. This doesn’t sound too absurd considering that Google have in fact, have favored Google Plus in the past. 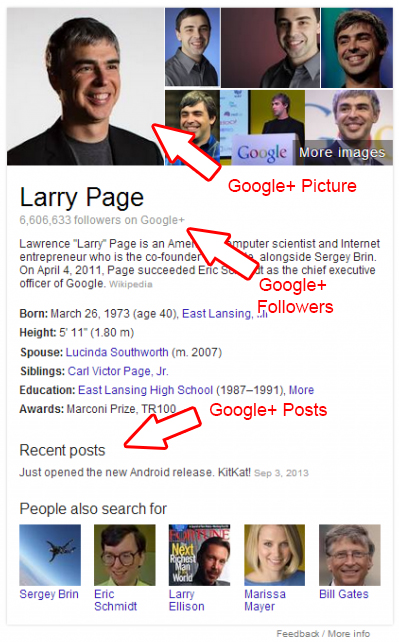 There was a time when the information included in the Knowledge Graph panel is derived mostly from Google Plus.

There used to be a time when contents in Google Plus profile are heavily featured in Google Knowledge Graph. It is also a fact that only until recently, YouTube users are practically forced to create Google Plus account to post videos. But is this the same case?

Well, it could be. But considering over the years Google does make an effort to push less their own products, I’m thinking that it’s more about convenience rather than favoritism.

Matt Cutts once explained that extracting data from other social media sites is not an easy task.

Other social media like Facebook or Twitter have their own privacy/security settings. So, Google’s ability to extract data from those sites might be limited. At one time Google was even banned from crawling on a certain platform for a month and a half.

Such limitation doesn’t exist on Google’s own platform. Being in their control, extracting data from Google Plus to be used in ranking factor would be much easier.

Wrapping up the case study

So basically what can be concluded from the case study is:

So with this, let’s take a look at how I did my sharing in Google Plus so that you too can get the same results.

When people post on Google Plus, usually they just post on their own profile or company page. This is a very common mistake, even I was guilty of it earlier on. 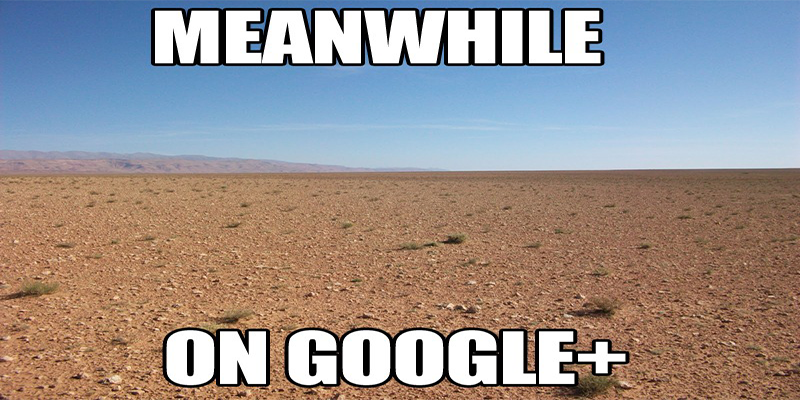 Common perception of the general population regarding Google Plus.

Given the lack of popularity of Google Plus among the common masses (compared to Facebook, Twitter etc) and the stigma that Google Plus is a ghost town, it’s understandable that few understand its true potential – Communities.

But is Google Plus really a ghost town though? To illustrate this, let’s compare how the communities fare against other more “popular” social media communities:

Comparing small business communities in Facebook, LinkedIn and Google Plus.

This not only proves that the Google Plus communities are alive, but it’s also bustling with activities even more than other platforms. While Facebook and Twitter might be more popular to casual users talking about random daily stuff, Google Plus is where people with interest on focused topics hang around.

With this in mind, let’s look at how you can start posting on Google Plus communities. This of course, assuming that you already have a Google Plus account:

1. Search communities related to your field

There are tons of active Communities with a huge amount of members covering a plethora of niches. You can start by looking through the 25 Biggest Communities on Google Plus. Among the ones worth mentioning:

And don’t just limit yourself to the big players. You can search subjects related to your business and find suitable communities to join. For example, I join various groups centered around SEO, Blogging and Content Marketing.

2. Decide which communities to join

From the examples given above, you might think the only communities worth joining are those with at least half a million members. This is not the case as big communities doesn’t always mean a lot of engagement.

They are either strictly moderated or rampant with spam. Sometimes your shares will get drowned by the fast paced activity of large communities so you need to find the right amount of balance.

Some of the things you need to consider when deciding which communities to join:

3. Start engaging with the community

Once you joined a community, you can start interacting with the members to show that you’re not in it just to dump links. It’s a good idea to first introduce yourself upon joining, especially if the practice is encouraged in the Community Rules. 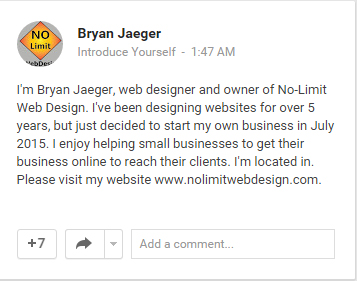 Introducing yourself when first joining a community is a good practice to be observed.

You can observe the discussions happening in the community and participate in those you related to your expertise. It’s a good opportunity to build your reputation and familiarize yourself with the rest of the members. 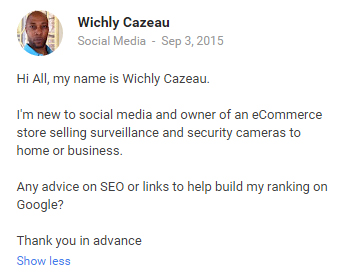 Questions related to your field are opportunities to share your expertise.

Sometimes, questions asked by other members can also be a chance to use your contents as an answer. You can also get ideas on what to write by observing actual questions often asked.

Once you got the hang of a community, you can start sharing your contents on a regular basis. There are few ways you can go about doing it: 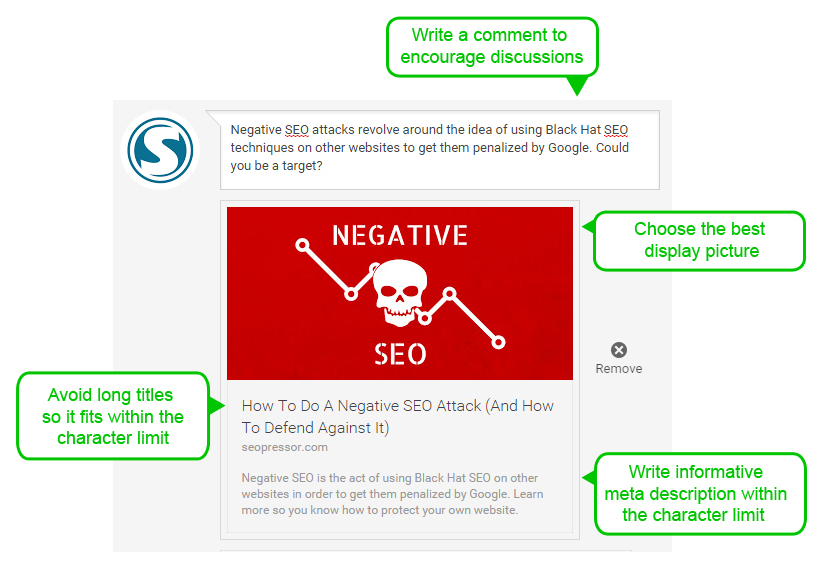 Make the best out of the preview display.

It is important to note that in order to maximize engagement, you shouldn’t simply drop links and be done at it. Here’s what you can do:

5. Monitor and respond to feedback

Never ignore comments people write on your shares. Even if it’s just a simple “good post” comment, try to get them to interact more by asking their opinion on subjects discussed in the article. The more comments a share have, the more others are attracted to join in the fun. 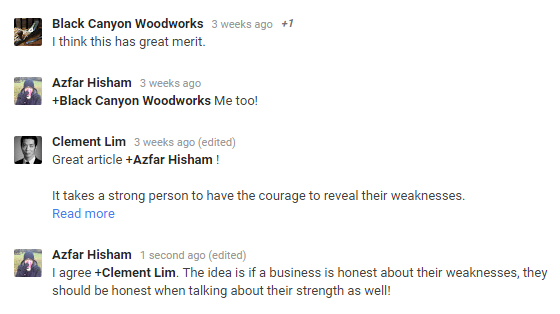 And the livelier the comment section, the stronger the signals it will give Google that it’s a good content!

As you build reputation by posting quality contents, people will start to follow you. This increases the viewership of contents you post in your own timeline. I created and use my Google Plus profile mostly for work-related stuff. In the beginning I only have a handful of people in my circle, almost all are my officemates. 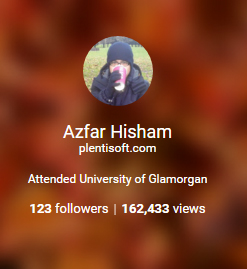 Not exactly a superstar, but the extra exposure sure does come in handy.

As I started to share more and more of my contents, people started to follow me and before long, I gained quite a few of them. Now shares on my own profile are no longer seen, shared and +1’d exclusively by my officemates, but also by others who’s interested in my posts.

You can post in tens of communities but in the end, it’s still up to the readers to comment, share and +1 your post. If you keep pushing less favorable contents, that counts as spamming and you will soon find them deleted and get yourself banned. On the plus side, you know a content is truly good if it manage to get a lot of people sharing and commenting.

And even though interaction in Google Plus can quite directly affect organic traffic, they also dwindle down once you stop sharing. Hence, it doesn’t replace a good SEO in the long term.

Give it a try if you still haven’t. I’d love to hear if this work for you!