Writing For Millennials: Engaging The New Generation Of Consumers 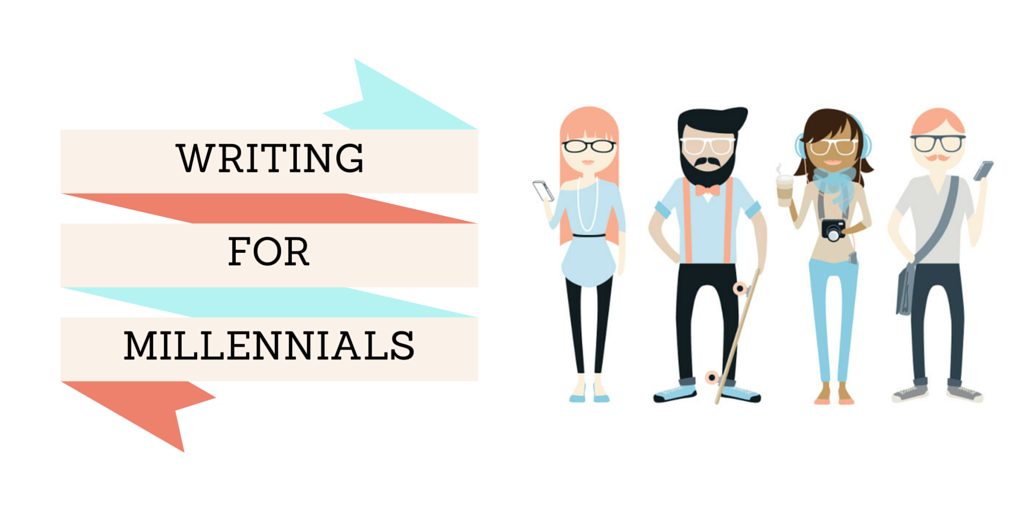 Millennials are one of the fastest-growing consumer groups in the world, with more entering the world of adult consumerism every day. There’s a lot of competition to market towards them, but marketing to Millennials presents a number of challenges that are completely unlike marketing towards the Gen-Xers and Boomers who preceded them.

So in this article, we’ll take a look at common trends and attitudes among Millennials, and offer concrete recommendations on how to write and market towards them for best results.

Why Market And Write For Millennials

Millennials were “just kids” a few years ago, but now they’re quickly becoming one of the most important consumer groups in the nation. It’s estimated there are around 80 million Millennials in the US -roughly a quarter of the population- who have a combined buying power of $1.3 Trillion dollars per year.

Those numbers are only growing by the day, as more Millennials enter the workforce and obtain supportable incomes. The oldest are already starting to have families -although Millennials have been slower to reach that milestone than previous generations- and will very soon be the mainstream marketing audience.

So whether you’re more interested in the device-obsessed youth market, or currently pitching your products mostly to Xers, Millennials are a major buying force that cannot be ignored. It won’t be long at all before they are in the same positions that the Xers currently occupy.

So what is a Millennial, anyway? Even that question is a bit hard to answer, as demographers have had a difficult time defining when the generation began.

They are generally defined as the children born in 1980 and beyond, but even that definition has quite a bit of leeway. There’s a shadowy sub-generation, occasionally referred to as Generation Y, which could be roughly defined as: “Old enough to be an Xer, but raised in a tech-focused household that provided a Millennial-like upbringing in the late 70s and 80s, especially access to online information before it became ubiquitous.”

Likewise, there are some who are young enough to be Millennials, but were raised in a traditionalist or less-technological way which gave them Xer- or Boomer-style mentalities.

While not universally agreed-upon, access to the Internet (or earlier online iterations) seems to be one of the primary factors that separates Millennials from previous generations, especially psychologically. This would also account for why the beginning date for the generation is so hard to pin down, since Internet access took roughly 20 years to roll out to widespread use.

So it’s hard to have too many specifics for Millennials as a whole, but these are some traits which are often common to the generation:

So, it’s not hard to see just how different Millennials are from the generations that preceded them. This is vital to keep in mind when attempting to write for them, or engage in any sort of marketing efforts.

Writing For Millennials: Engaging An Audience That Resists

It’s little wonder that many marketers, especially older ones, consider marketing to Millennials to be a Herculean task. Yet it CAN be done, and mostly requires patience combined with an understanding of how their minds work.

So, let’s start with the cardinal rule which should be remembered in any engagements with them of any kind:

Do not lie to Millennials.

There are no exceptions to this rule, and violating it can risk destroying a brand’s credibility among millions of individuals. Every Millennial with an online background is deeply familiar with search techniques and getting information out of Google. It can be safely assumed that any factual claim made in any form of outreach will be fact-checked, and the presence of a seemingly-deliberate falsehood is an instant dealbreaker. Worse, social media can spread such gaffs worldwide in a matter of hours.

Honesty truly is the best policy when talking to Millennials.

Plus, younger buyers will often reward honesty, such as the success of Domino’s self-effacing admissions that their pizza “tasted like cardboard” and needed to be reworked.

Now, with that in mind, here are some more specific suggestions:

*One Big Caveat: Attempts to use memes, trends, or viral materials inappropriately will misfire and lead to mockery. Seek to understand memes and their common usage before deploying them, to ensure they’re properly received. There’s a section of Reddit called /r/FellowKids devoted entirely to failed attempts at “talking like the kids do,” and we suggest browsing it for many examples of what not to do when targeting younger audiences.

Writing for Millennials mostly requires an understanding that their needs, interests, attitudes, and psychology are vastly different from previous generations. Effective outreach is largely about recognizing these differences, and being willing to update your strategies accordingly.

Brands which are honest, forthright, sincere, and look to engage Millennials on their own terms should have great success in their outreach.